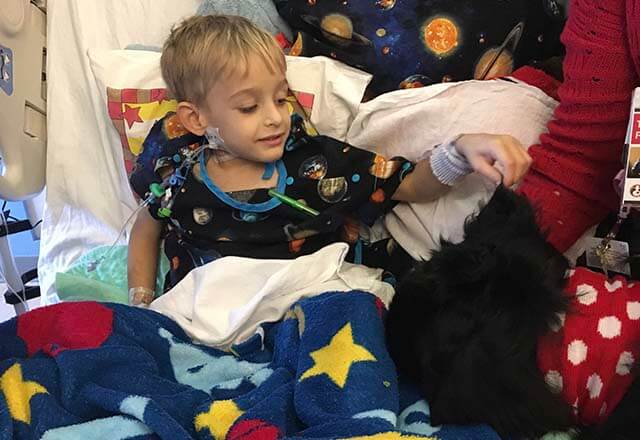 Even before Daniel was born, his mother JoDee knew her son would be a fighter.

When Daniel was 20 weeks in utero he was diagnosed with posterior urethral valves (PUV), a condition in which the amniotic fluid is stuck inside the baby’s body instead of in the amniotic sac. This meant that Daniel could not learn how to breathe or swallow while in utero. Doctors at a local hospital performed two surgeries in utero, but unfortunately the problems PUV caused could not be fixed in utero—Daniel’s kidneys and bladder were destroyed.

The eventual need for bladder surgery and a kidney transplant led the family to Alicia Neu, chief of the Division of Pediatric Nephrology at Johns Hopkins Children’s Center.

“We believed it would give us the best chance at the best quality of life for our son,” JoDee says.

Before Daniel could receive a new kidney, he underwent multiple surgeries with pediatric urologist Heather Di Carlo who successfully repaired his bladder. Without Dr. Di Carlo’s expertise, Daniel’s bladder would not have been strong enough when the time came for his kidney transplant. Once home from the hospital, he worked with Johns Hopkins outpatient physical therapists to relearn how to walk.

Later that year, when Daniel was in kindergarten, he finally needed a new kidney. Within two hours, 27 people called to see if they were a match to give Daniel a kidney. The boy’s dad, Moise, was a perfect match, and Niraj Desai, surgical director of the Johns Hopkins pediatric kidney transplant program, successfully performed the transplantation. Moise’s surgery lasted four hours, and Daniel’s took almost seven.

Three months after the transplantation, Daniel went into culture negative sepsis, a form of septic shock. His parents took him to the Harriet Lane Clinic to see Neu, his beloved specialist. Daniel needed IVs in both arms to stabilize his blood pressure, and because his body had stopped agreeing with the anti-rejection medicine, an ambulance took him across the street to the Children’s Center emergency department. It took seven doctors two hours to bring Daniel back. He recovered in the hospital for three weeks before finally going back home.

Daniel has never known a time that he wasn’t different from other kids, but that doesn’t stop him from fighting every single day. He is now a courageous 8-year-old who loves to play soccer.

“Johns Hopkins Children’s Center is full of everyday miracles, and those miracles are made possible by the doctors, nurses and all of the people who care for our children,” JoDee says.