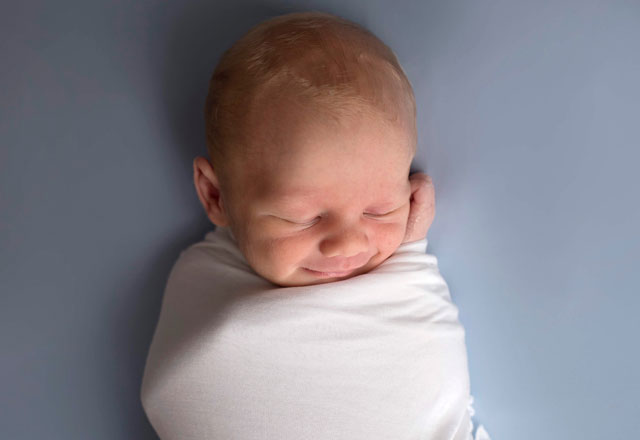 Colin and Liz were thrilled to bring Bobby, their second son, home in 2018. The family of four enjoyed 10 beautiful days, then Liz noticed that Bobby’s stomach seemed really hard. Immediately concerned, she and Colin took him to his pediatrician, who recommended that Bobby go to the local hospital to get checked out. Imaging revealed that the boy — who weighed only 8 pounds — had a golf-ball size mass on his liver and needed more tests.

Bobby was rushed to Johns Hopkins Children’s Center by ambulance, where a biopsy showed that he had a rare malignant rhabdoid sarcoma on his liver.

“It was just the biggest shock,” Liz says. “The doctor came in and told us that this type of cancer was very rare and there’s very little research, but they promised they were going to do the best they could for Bobby.”

Inpatient chemotherapy was begun immediately in an effort to shrink the tumor so that it could be removed surgically. Unfortunately, after nearly two months of treatment, Bobby developed veno-occlusive disease, a rare complication from the chemotherapy that can cause kidney failure. Due to the risks, doctors had no choice but to stop Bobby’s chemotherapy.

Two weeks later, tests revealed that his tumor had grown back to its original size, losing all the progress that was made. There were now cancer cells in his blood, meaning the tumor had ruptured. Colin and Liz were devastated.

“We were told there was nothing more they could do for Bobby and that we should enjoy the time we had left with him,” Colin recalls. “That last week felt like a lifetime, which was such a blessing,” adds Liz.

“I remember telling him we loved him and you’re not alone. All he did his whole life was fight — it was all he knew how to do,” says Liz. “Bobby spent more of his life at Johns Hopkins Children’s Center than at home, and they did everything they could for him.”

Liz carried Bobby down the hallway for his final salute, where the doctors and nurses who cared for him paid their final respects. A rapid autopsy allowed preservation of some of Bobby’s tumor’s cells, which Liz and Colin hope will fuel research that will lead to updated treatment protocols for rhabdoid sarcoma.

Four years later, Bobby’s legacy lives on, and he continues to inspire not only everyone who met him but also many who never had the privilege. Colin and Liz have started Team Baby Bobby in his memory, and they race in the Baltimore Running Festival each year with Team Hopkins Kids, raising funds for pediatric cancer research at Johns Hopkins Children’s Center. Colin owns and operates a barbecue catering company — Bobby O’s BBQ, named in his son’s honor ­— and donates a part of the proceeds as well.

“We hope that one day, even one family will be spared the pain that we have felt,” says Liz. “And the only way for that to happen is for there to be more research. We’re so grateful for places like Johns Hopkins Children’s Center that are willing to do that for kids like Bobby.”