Amber: A Sparkle of Hope 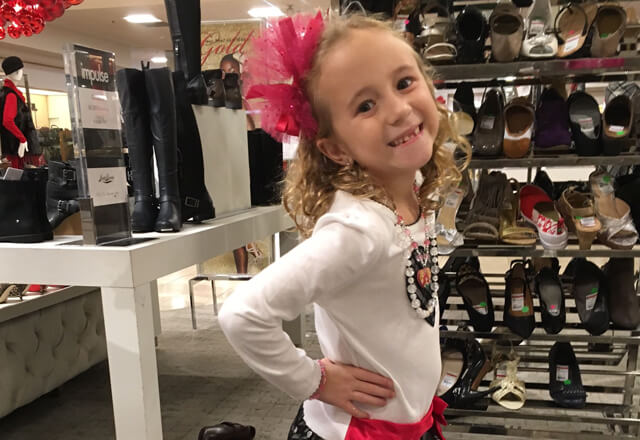 In August 2012, Amber’s parents, Ken and April, suspected something was wrong with their 3-year-old. After being bitten by a mosquito, she developed a low grade fever that prompted Ken and April to bring Amber to her pediatrician. Amber’s pediatrician was concerned that Amber’s spleen might be enlarged and ordered additional tests. An ultrasound revealed the worst: Amber had a large mass, likely cancerous, on her left kidney, pushing her spleen forward.

Immediately upon hearing their daughter might have cancer, Ken and April brought Amber to the Johns Hopkins Children’s Center. At Johns Hopkins, she was diagnosed with a Wilms tumor the size of a baseball. Wilms is the most common form of pediatric kidney cancer. Within 24 hours, Johns Hopkins pediatric surgeons removed Amber’s left kidney. Unfortunately, the stage 4 cancer had already spread to her lungs.

At the Johns Hopkins Children’s Center, the 3-year-old underwent a round of radiation and 33 weeks of chemotherapy treatment. Their daughter’s strength and playful attitude throughout helped them make it through this difficult time, her parents say.

An effect of chemotherapy, the loss of her hair, proved challenging for the entire family.  “It’s just hair, but when it falls out of your 3-year-old, it takes everything to get through a day,” says Ken.

Amber finished chemotherapy at the end of April 2013 and was deemed cancer free on May 1, 2013. She started preschool cancer-free that following September. Now 7 years old, Amber loves Frozen, takes gymnastics and swimming classes, and has a pet guinea pig named Olaf.