Alivia: One Step at a Time 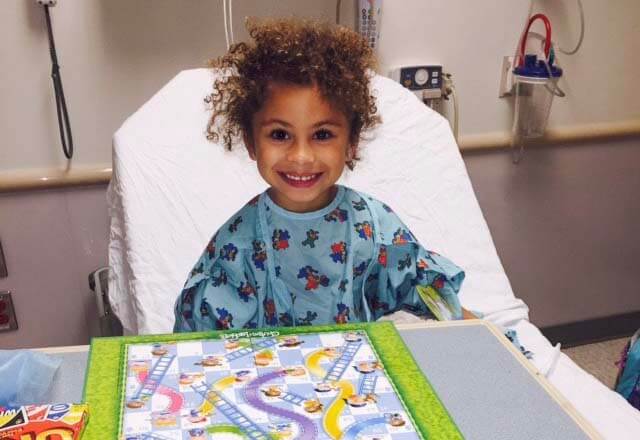 While potty training Alivia, her parents, Gabrielle and Bryan, noticed differences in the way she was going to the bathroom, describing her voiding as a “leaky faucet.”

Multiple appointments and misdiagnoses at hospitals around the country led Alivia and her parents to Johns Hopkins Children’s Center and pediatric urologist John Gearhart. Dr. Gearhart diagnosed Alivia with bladder exstrophy with a skin variant and female epispadias. Alivia’s pelvis had not fused together in the womb, forcing her bladder higher up in her abdomen than where it should have been. Alivia’s condition is so rare, most doctors had only seen it in textbooks, causing her to not be diagnosed until age 5.

On Jan. 27, 2016, Alivia underwent a 12-hour surgery to put her bladder, “where the good lord intended it to be,” says Gabrielle. Alivia’s orthopedic team also performed an osteotomy, during which they fractured her hips, rotated them closer together and inserted six pins with an external fixator to hold the bones in place so she could heal properly.

Although Alivia’s surgery was successful, she still had a long road to recovery. She woke up unable to feel her feet, with an epidural to keep her flat on her back and weights holding down her legs to keep them still during her eight-week recovery. Each morning, Alivia asked if today was the day she could walk again.

Eight weeks later, after removing all six pins, Dr. Gearhart finally told Alivia she could return home to Chicago. Through physical therapy three days a week for six months, Alivia regained her strength and was finally back to her eager, adventurous self.

Alivia’s journey does not end here. Every six months Alivia and her family travel back to Johns Hopkins from Chicago for her to go under anesthesia and receive ultrasounds, cystoscopies and Deflux injections, among many more tests to measure her bladder growth. The family doesn’t know when and if the day will come, but once her bladder reaches the minimum capacity necessary to qualify for bladder neck reconstruction surgery, they will return to Johns Hopkins Children’s Center for Alivia’s second major surgery, which will also include an eight-week recovery.

Now 7 years old, Alivia loves coming back to Johns Hopkins Children’s Center. She wants to be a doctor when she grows up so she can help other children who are sick.

“Bladder exstrophy makes Alivia who she is, but it doesn’t define her. I wouldn’t change anything,” says Gabrielle.