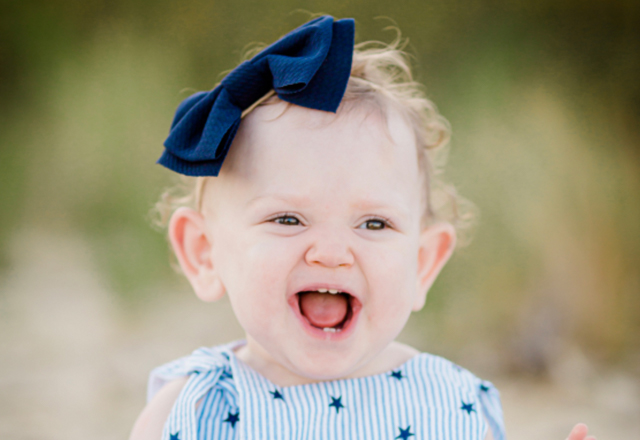 Emily’s pregnancy had been relatively normal, then everything changed when she started having contractions during her routine 18-week sonogram. Doctors at the local hospital admitted her for close monitoring and sent her home after a few days, recommending that she take it easy.

At 21 weeks, Emily experienced an extreme hemorrhage and felt like her water had broken. She rushed to the hospital, where she spent a week as an inpatient and received the devastating news that her baby likely wouldn’t survive. Emily and her husband, Craig, refused to let go of the hope that their baby could be born healthy, and they sought care at Johns Hopkins.

When Emily began bleeding again a few days later, they rushed to Johns Hopkins, where she remained for 10 days before being discharged with specific instructions about signs and symptoms that would require her to return. Doctors advised that if she could make it to 24 weeks, there was a good chance her baby could be born viable.

At 24 weeks and two days, Emily felt a “gush” and hurried back to Johns Hopkins. This time, she was there for two and a half weeks, and doctors monitored the baby’s heartbeat daily to determine if she was under any stress that would make an immediate delivery necessary. After two false alarms, at 26 weeks and three days, the time had come: Emily’s baby was in distress and needed to be born.

Emily’s biggest fear was being alone for the delivery. Craig was at work, 45 minutes away.

“45 minutes in the car is a long time to be alone with your thoughts, I was terrified that in one day I was going to lose the two loves of my life,” Craig says. “I just knew I needed to get there to hold my wife’s hand and be there for the birth of my daughter.”

Emily underwent an emergency c-section, and Abigail “Abby” was born crying, weighing a mere 2 pounds, 2 ounces. Craig had made it on time and got to see newborn Abby — and take a photo — before nurses wheeled her away for immediate admittance to the NICU. Abby was so tiny, she could fit in the palm of Craig’s hand and his wedding ring fit around her ankle.

Born with underdeveloped lungs and intestines, Emily and Craig knew they likely had a long road ahead of them. During her first 27 hours in the NICU, Abby had what is called “the honeymoon period,” and she was breathing on her own. At 28 hours, Abby experienced sudden intestinal perforation and bile was flooding her body, threatening infection. She had emergency surgery in her private NICU room to place drains and repair the perforation.

Abby's drains stayed in for six weeks, but after the drains were removed doctors couldn’t regulate her breathing and she started to code.

“I remember holding her and she turned an awful shade of blue,” Emily says.

Ultimately, Abby needed to be intubated. She coded twice more — the third time, it took a team of respiratory therapists three hours to resuscitate her.

“We got a call that Abby had taken a turn for the worse and we needed to get to the hospital as soon we could,” Emily says. “They said we needed to decide if we were ready for them to do anything they could or if we wanted to talk about palliative care. We knew our little girl wasn’t done fighting and we would do anything for her.”

Abby had developed an infection, and doctors placed her in a medically induced coma for seven days to allow her body to rest and heal. Abby remained intubated for three months, and once she was able to breathe on her own, she underwent surgery to place a g-tube.

After 314 days in the hospital, Abby finally went home with Emily and Craig — they were a family of three. Now 21 months old, Abby has started walking, and she regularly returns to the Children’s Center for follow-up care.

“The day that Abigail was released was one of the most exciting days of my life. There’s nothing like waking up in the morning and seeing your baby happy, healthy and home with you,” Emily says. “She’s here for a reason, and she’s fought so hard to be here. I will always be thankful for staff at Johns Hopkins Children’s Center and the ability they have to not only save lives of children but to save families — something we will always be grateful for.”