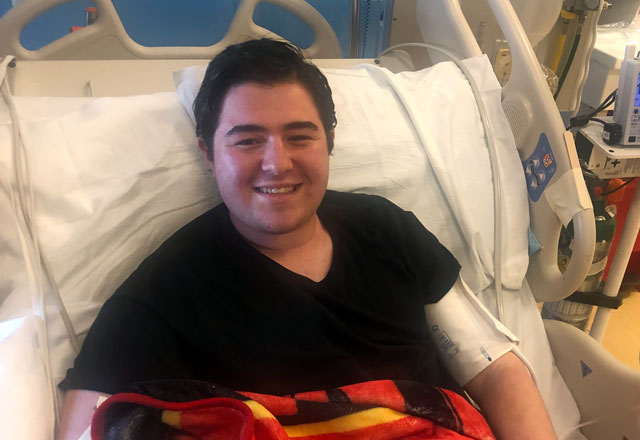 In 2019, Noah, then age 14, was throwing a lacrosse ball around with his father and younger brother outside their Baltimore home when his hand started shaking and his speech began to slur. His parents, Jamie and Scot, quickly called 911, and Noah was rushed by ambulance to an area emergency room. After imaging determined that Noah suffered a stroke, he was immediately transferred to Johns Hopkins Children’s Center.

“That massive stroke took away the entire right side of his body, his ability to walk and some of his cognitive abilities, and also affected his speech,” says Jamie. With the help of physical, occupational and speech therapy, and visits with physicians including Ryan Felling, M.D., Ph.D., a pediatric neurologist and director of the pediatric stroke program at the Children’s Center, Noah’s condition improved.

Then, 19 months later, in April 2021, Noah experienced another stroke, causing double vision among other symptoms. He returned to the Children’s Center, where he was hospitalized for three days.

Four weeks later, he had a third stroke — this time in his cerebellum, which is in the back of the brain, causing swelling and raising the possibility of a need for brain surgery. Thankfully, the swelling soon subsided and surgery was not necessary.

“It was definitely the scariest day of my life,” Noah recalls. “I remember holding my dad’s hand and crying because I didn’t know if I was going to make it. I told myself I was going to do whatever I had to do to get out of the hospital.”

After several months of intense physical therapy, follow-up care with his physicians and the help of medication, his doctors say Noah is doing well. Now 17 years old and in his senior year at the Boys’ Latin School of Maryland, Noah, an avid soccer player, hasn’t returned to the sport. He instead focuses on coaching elementary-age players at his former soccer club. He also hopes for a career in the medical field to help others with a condition similar to the one he has.

“I believe in miracles because I’m a living miracle,” Noah says. “Johns Hopkins Children’s Center has helped give me my life back.”