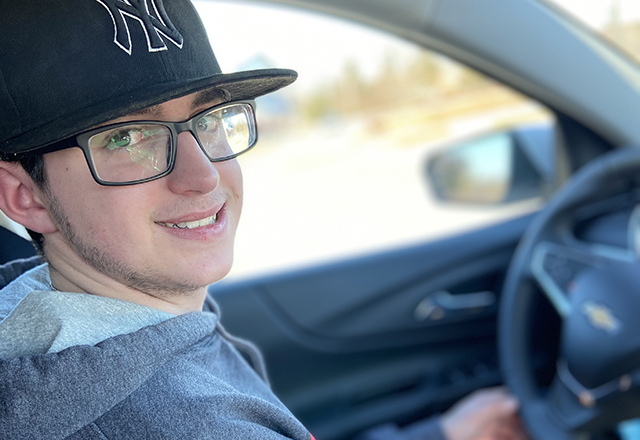 On Memorial Day in 2020, 15-year-old TJ took advantage of the nice weather and went longboarding with some of his neighborhood friends. They found a hill they’d never been down, and the next thing TJ remembers is waking up in the grass across the street. He had fallen off his longboard, and recalls that his shoulder and eye hurt. He was not wearing a helmet.

TJ called his dad, Tom, who brought him to urgent care, where physicians immediately called an ambulance, indicating that TJ would need more extensive care than they could provide. Tom called his wife, Melissa, who met them at urgent care and rode with TJ in the ambulance to a local hospital. A CT scan revealed that TJ had an epidural hematoma, a severe brain bleed.

“The doctors took one look at TJ and said I needed to keep him calm because he was going to be airlifted to Johns Hopkins Children’s Center,” Melissa says. “Watching them load TJ into the helicopter was surreal. I remember looking at Tom and asking how is this happening? But I knew if there was anywhere that could save him, it was Johns Hopkins.”

Because of COVID-19 protocols, only one parent was able to accompany TJ into the hospital. Melissa called Tom, who was waiting outside, and he said goodbye to TJ over the phone.

“I felt helpless. I couldn’t stop thinking that even if he did survive, was it going to be him? Or was he going to be the shell of the brilliant young man that he was?” Tom recalls.

“I asked Dr. Cohen if he was going to be OK, if he was going to know who we are when he woke up,” Melissa says. “And he said, ‘we just don’t know, and we won’t know until we wake him up.’ I’ve never been so scared in my entire life.”

After two-and-a-half nerve-wracking hours, Cohen emerged with an update: TJ fractured his skull when he fell, causing his brain to start bleeding. The original CT scan results showed a brain bleed about the size of a quarter, but by the time Cohen was able to operate, the bleed had grown to 5 inches in diameter. Thankfully, Cohen was able to stop the bleeding and inserted a titanium plate into TJ’s skull to repair it.

“When we saw TJ in his PICU room after surgery, the first thing he said was, ‘Dad, I’m OK,’” Tom says. “It was truly a miracle; he was completely himself when he woke up.”

TJ underwent physical therapy while in the hospital, and four days later, he returned home without any further complications. Since his accident, TJ and his family have become advocates for helmet safety.

“It’s so important to wear a helmet; it doesn’t matter what you’re doing or how you’re doing it — you can still get hurt. Even the smallest fall can change everything,” TJ says. “There was a very slim chance that I would be able to get out of this injury without any permanent damage, but I had a great team of doctors at the Children’s Center taking care of me.”

Now 16, TJ is a sophomore in high school, and his favorite subject is engineering. He wants to serve his country in one of the branches of the military or go into the engineering field — maybe both. He still loves longboarding.

“I believe in miracles because my son is still here today,” Tom says. “Johns Hopkins Children’s Center saved my son’s life, and there’s no other way to put it.”