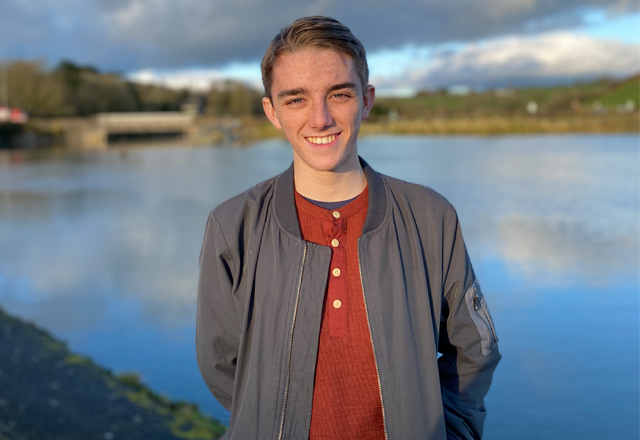 Liam’s journey with cystic fibrosis started before he was born. At 20 weeks pregnant, his mom, Suzi, was having a prenatal ultrasound when doctors noticed something was wrong.

“I think the hardest thing was being told your child has a disease that has a life expectancy,” Suzi says. “To have a number put to when your child might die was probably the hardest part of the diagnosis.”

Liam, now 17 years old, is treated for cystic fibrosis (CF) at Johns Hopkins Children’s Center. Over time, CF, a life-threatening genetic disease that affects the lungs, pancreas, liver and other organs, limits the ability to breathe. It causes thick mucus to clog the airways in the lungs, trapping germs and leading to infections. The buildup of mucus in the pancreas also prevents absorption of food and vitamins, resulting in malnutrition and poor growth.

While in sixth grade, Liam got an infection called nontuberculous mycobacteria, which is incredibly rare, including for people with CF. This antibiotic resistant “superbug” only affects 10%–12% of CF patients. Liam is still fighting it today.

His parents fear that one day, doctors will run out of antibiotics that can treat him. Liam has developed resistance to some antibiotics and has had negative reactions, like temporary hearing and vision loss.

“To have a person have to deal with that, on top of everything else, that was quite frightening,” his dad, Mark, says.

For now, though, that worry has been put to rest. Liam is currently on a brand-new medication to fight his lung infection — he’s the first and only patient at Johns Hopkins Children’s Center to take this medication. And while his lung function is still low, it hasn’t gone down.

Although Liam’s lung function is at 43%, he tries to live as normal of a life as possible. He loves to sing and perform, which are not typical activities for people with lung disease.

“I try to still do things that people with my lung function shouldn’t be able to do,” he says.

Liam and his family are grateful for the community that Johns Hopkins Children’s Center has built for patients with cystic fibrosis. The family dynamic and staff are the best parts of Johns Hopkins, according to Liam.