A Celebration of Life, Love and Leo 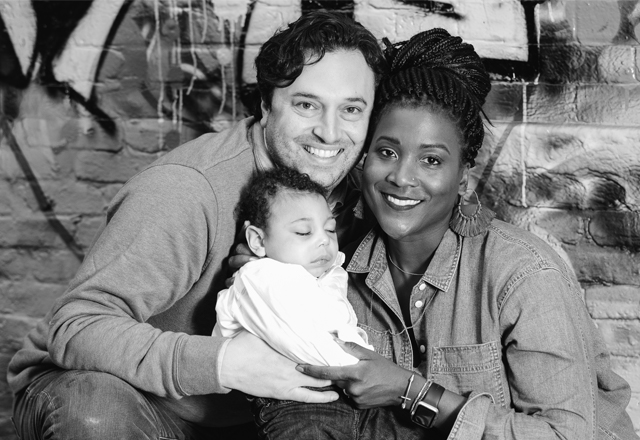 Brandie D’Orazio experienced a normal pregnancy with her fourth child. The only exception was that the baby measured slightly small. But all of Brandie’s children measured small, so there was not much reason for concern. She delivered her son, Leo, on Jan. 5 at the community hospital where her other three children were born.

Upon delivery, Brandie, a nurse, immediately knew something was wrong. Leo entered the world completely quiet — most babies come out screaming, including her other children. Doctors admitted him to the full-term nursery, but at 5 hours old, Leo’s breathing paused, and he was transferred to the NICU. After a series of tests, on Leo’s fourth day of life, the physicians determined he likely had pontocerebellar hyperplasia (PCH), an extremely rare terminal genetic disorder that impacts development of the brain. Leo would likely never breathe on his own.

Brandie and her husband, Dan, made the decision to transfer Leo to Johns Hopkins Children’s Center for additional care. There he underwent further tests, and doctors confirmed that he had PCH. The disease is so rare that research on it is very limited, and information in the literature is very sparse, especially for boys. The medical team believed that if it removed breathing support, Leo wouldn’t survive on his own.

After many challenging conversations and deep prayer, with Leo’s quality of life as their “guiding star,” Brandie and Dan made the difficult decision to remove care.

“I love Leo so much that I was willing to let him go. I knew that I didn’t want him to be in discomfort. I wanted him to be free and not be in pain. I knew he would always be with me,” Brandie says.

Before removing care, they had him baptized by their deacon. Children’s Center child-life specialists played a critical role in helping the D’Orazios communicate this very challenging news to their three younger children, in addition to conducting memory-making activities with Leo. On just his 18th day of life, family, the Johns Hopkins medical staff, the palliative care team and chaplain Kat Kowalski all gathered around Leo and prepared to say goodbye.

“We removed support and the minutes turned into hours, which turned into a few days. And Leo’s breathing improved. He was breathing on his own,” Dan says.

Leo surprised everyone, and his breathing strengthened. Doctors discharged him on hospice care — among the many complications, PCH causes blindness, limited hearing, an inability to eat and respiratory distress. No one expected him to live longer at home than perhaps a few weeks.

Days at home became months. Brandie and Dan monitored him almost hourly, terrified he would suddenly stop breathing. During one of their many visits with Leo’s neurology team at the Children’s Center, they learned that while he would eventually have difficulty breathing, it wouldn’t happen suddenly, but gradually. This gave them a newfound sense of freedom from the constant fear of sudden death.

The D’Orazios cherished their time as a family of six. And while Leo returned to the Children’s Center regularly for follow-ups and scheduled procedures, under Brandie and Dan’s careful watch, Leo spent minimal time in the hospital for nearly two and a half years.

In November 2019, just after Thanksgiving, Leo fell ill with what seemed like a typical cold — similar to colds that he usually got over in a week or two However, this time was different. Whenever his parents thought he was improving, he regressed, and never returned to his base line. Brandie and Dan had remained in constant communication with his pediatrician and care team at the Children’s Center, cognizant of the quality of life they always prioritized for Leo.

On Friday, Jan. 3, 2020, Brandie and Dan brought Leo to the Children’s Center Emergency Department, and the family chose to admit him after a diagnosis of pneumonia throughout both lungs. The family’s hope was that during an inpatient stay, the medical team could deliver stronger IV antibiotics and administer more frequent nebulizer treatments while monitoring his heart rate and oxygen levels — interventions that weren’t possible in the same way at home.

On Saturday, Leo crashed, and the family had an early-hours conversation with the inpatient palliative care team about possible end of life decisions. Doctors stabilized him just in time for his third birthday on Sunday. Surrounded by his family, friends and members of his lifelong care team, Leo remained stable for a beautiful birthday celebration at the Children’s Center. But late Sunday night, his respiratory function began to fail, and he crashed three more times.

“Throughout Sunday night, I realized we were in a different point. I am not even sure everyone could see it, because Leo always bounced back, but it was one of those things where I knew we were at a crossroads,” Dan says. “Brandie was going to bring the kids back on Monday, and instead she came back alone so we could evaluate what was best for Leo.”

On Tuesday, Brandie and Dan met with Leo’s care team: palliative care, neurology, child life, social work, pulmonology — everyone who had been with him from the beginning. They agreed Leo was in a different place.

Brandie and Dan made the difficult decision — still with Leo’s quality of life as their “guiding star” — to remove care on Tuesday evening. Their other children, who had come to love and care for Leo, came to see him. The Child Life team prepared activities, including making molds of each of their hands surrounding Leo’s.

Late Tuesday evening, Rev. Kowalski, known as Chaplain Kat, anointed Leo, and at 11:15 p.m. on Jan. 7, doctors removed his oxygen and did everything they could to keep him comfortable.

Leo spent his last hours with family and loved ones. Brandie and Dan remained by his side until he took his last breath at 4:15 a.m. on Wednesday, January 8. They took him on his “honor walk” around the floor, surrounded by the nurses and faculty and staff members who had cared for — and loved — Leo during his three short years.\

“You have grandiose ideas of miracles, but we really thought we only had days with Leo,” Dan says. “Leo smiling was a miracle. Leo being here for three years was an absolute miracle. Our kids’ ability to protect him, help him and love him was a miracle. That Leo could help other people, and that he brought us into the journey and to try to tell his story to help other people is a miracle.”

“Johns Hopkins Children’s Center is a lifeline, and we’ve realized with life you cannot plan,” Brandie says. “Leo helped us see life differently, giving us incredible gifts that will stay with us and with our children. We cherish every day because we don’t know when the last day may be.”