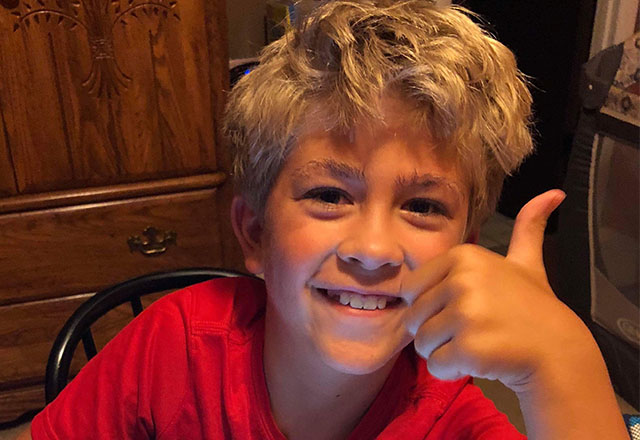 Jaxon’s mother, Dawn, first noticed something was wrong with him while she was looking at old photos. The 8-year-old had lost quite a bit of weight since the photos were taken. He had also been complaining that his head and throat hurt.

Dawn brought Jaxon to his pediatrician, who recommended immediate bloodwork. Dawn drove the drowsy boy to Johns Hopkins Children’s Center, where doctors admitted him for further testing that revealed he had type 1 diabetes. He remained an inpatient for four days — three of them in the PICU — while doctors controlled his blood sugar.

“You realize in a minute that your life is completely changed,” Dawn says. “It’ll never be the same.”

“It stinks — diabetes,” said his dad, Chris. “He should be out playing with his friends and doing what 8-year-olds do.”

Before Jaxon could be discharged, his parents needed to learn how to care for him and his diabetes. Overwhelmed by all the new information, Dawn and Chris admit they were worried during their first night at home.

Unfortunately, Jaxon is no stranger to the Children’s Center. He also has a heart condition that requires him to see a cardiologist several times a year. But thanks to their team at the Children’s Center, Jaxon and his family have the confidence to tackle his diabetes on a daily basis.

Now 10 years old, Jaxon is incredibly thankful to his parents who have supported him through his diagnosis.

“Johns Hopkins Children’s Center means more than I can even put into words,” Dawn says. “For Jaxon’s health, it’s everything.”