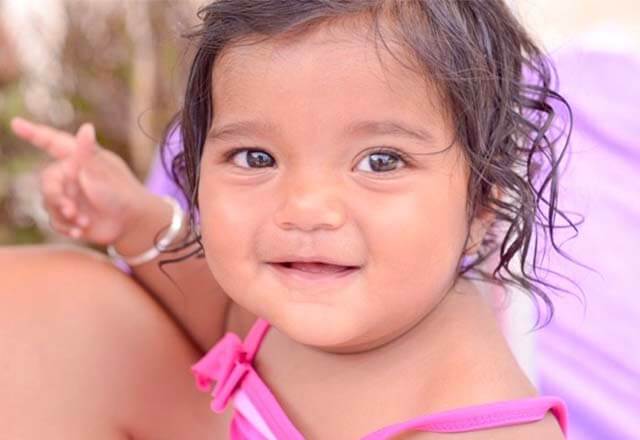 In fall 2017, Aarti and Ashish took their daughter to urgent care because of a low grade fever. The nurse there noticed some swelling along 3-year-old Shivaya’s right jaw, and when Aarti touched her child’s jaw, she felt a hard mass. Diagnoses from ear to staph infections followed until Aarti met with a radiologist for the results of a scan of her daughter’s right mandible, which had grown dramatically in just a few days.

Aarti and Ashish were told it was appeared to be a bone cancer, Ewing sarcoma. What it turned out to be, after work-ups at hospitals in Northern Virginia and Washington, D. C., was a central giant cell granuloma—not a malignant cancer but an aggressive tumor that was eating away her right jawbone and now starting to inflict substantial pain. Searching for a treatment for this rare tumor, Aarti and her husband consulted with and visited children’s hospitals up and down the East Coast. In November 2017, they found pediatric plastic and reconstructive surgeon Jordan Steinberg at Johns Hopkins Children’s Center, who recommended surgery but also supported a less aggressive treatment with corticosteroid injections to shrink the tumor.

The family chose the simpler, steroid therapy at a hospital closer to home. Unfortunately, the treatment showed limited effects and, in February 2018, the parents visited Dr. Steinberg again. Considering Shivaya’s deteriorating condition, he recommended an extensive jawbone resection and reconstruction. He would repurpose one of the girl’s ribs as a graft to replace the jawbone.

“What I proposed seemed a little radical as the first path, but I figured, given the extent of this tumor, nothing short of that was really going to work,” says Dr. Steinberg. “There was this huge mass that had eroded the jaw and was growing out of control. We knew that part of her jaw was no longer functional.”

The surgery was far from uncomplicated. To strengthen the odds of a good outcome, Dr. Steinberg chose as a collaborator pediatric otolaryngologist Jonathan Walsh, a specialist in operating on facial nerves as well as head and neck tumors. The two surgeons also relied on a 3D model of the tumor to plan the surgery.

The surgery was a success, and Shivaya’s parents report she is eating and “back to herself again” following physical therapy.

“We’re so fortunate that Johns Hopkins was in driving distance and that we found a team of doctors that was willing to work with us,” Aarti says. “The Children’s Center means the world to us. At the end of the day, they made her better.”

Giant cell granulomas have a high recurrence rate, so 4-year-old Shivaya returns to the Children’s Center every six months for monitoring. She will start kindergarten in fall 2019.