Two-year-old Bridget Diveley was a perfectly healthy toddler until September 2009 when she suddenly developed dilated cardiomyopathy, a condition in which the heart becomes enlarged and cannot pump efficiently. Her doctors believed it was triggered by a random viral infection. 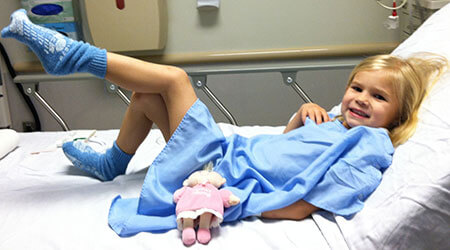 After admission to the Pediatric Intensive Care Unit (PICU) at Johns Hopkins Children’s Center, Bridget’s doctors explained to her parents that roughly a third of children with her condition recover fairly quickly, another third recover most of their heart function over time, and another third need a heart transplant.

After a few months in the PICU, Bridget’s condition, though still serious, was controlled well on medications. Doctors sent her home, hoping her heart would start to heal. Unfortunately, as the months passed, Bridget’s condition slowly deteriorated.

In January of 2010, she landed back in the PICU at Hopkins Children’s and was listed on the National Heart Transplant Waiting List.

In March of 2010, Bridget took another turn for the worse. Her state was so precarious and her heart so weak, that the cardiology team decided Bridget should have surgery promptly to put her on a ventricular assist device — essentially an artificial heart. But fate had other plans.

On Sunday, March 7th, at 6:50 a.m., less than 24 hours before her scheduled surgery, Bridget’s parents received a phone call informing them that a heart was available for their daughter.

After six agonizing hours spent in the waiting room, Bridget’s parents saw their daughter being wheeled out of the OR. She had a new heart and the surgery had gone well. Both the surgeon and the anesthesiologist told the Diveleys that Bridget’s new heart “just took off beating” as soon as it was inside her body. This, the doctors said, was a very rare occurrence, as most newly transplanted hearts take some time to start beating.  Like the incredible timing of the available heart, Bridget’s parents took the instant re-starting of the new heart as a sign that it was meant to be.

Upon waking up from her surgery, Bridget’s first request was for “blue juice,” a name reserved for her favorite, non-flavored Pedialyte drink, whose bland taste many children find unpleasant, yet, for some reason, Bridget came to love during the long months in the hospital..

After an endless stretch of time spent in the PICU prior to surgery, Bridget went home just eight days after she got her new heart.

For the few months, Bridget did well, but in July of 2010, a routine biopsy revealed moderate rejection, an indication that her immune system was rebelling against the new heart. In an attempt to tame the rejection, Hopkins Children’s cardiologists placed Bridget on intravenous steroids for three days. Bridget recovered well and three subsequent biopsies have shown reassuring results.

Bridget’s parents were especially dreading a biopsy scheduled for mid-December, fearing that any unfavorable findings would ruin Bridget’s third birthday in December and Christmas, forcing her to spend both at the hospital.  But on Dec. 14, 2010, Bridget had a heart biopsy that showed zero rejection — the best Christmas present the Diveleys could have hoped for.

The Diveleys praise the top-notch scientific expertise and medical care their daughter received at Hopkins Children’s. But they are particularly grateful for the human touch and kindness of the staff there, examples of which include doctors singing and dancing to Bridget while trying to distract her from her newly placed nasal feeding tube, a nurse frantically looking for Bridget’s favorite Cheerios and finally running to the cafeteria to buy them for her, and child life specialists bringing toys and books to Bridget daily, reading to her and playing with her.

“We expected the physicians at Hopkins to be the best in their fields, but we had no idea that they would be so personable, approachable, and playful,” Bridget’s parents explained, referring to a time when a pediatric cardiologist put down his medical notes, sat on a mat on the PICU floor and joined Bridget for a picnic with pretend food.

Despite Bridget’s miraculous post-surgical recovery, her parents are aware of the unknowns that lie ahead. They were told that transplanted hearts have a lifespan of about 15-20 years, so Bridget may very well need another new heart one day. Then again, her parents hold on to the hope that medical advances in the next 20 years will save Bridget, and many others like her, from the need for repeat transplants. Hopkins Children’s doctors and colleagues from other pediatric transplant centers are currently on a quest for ways to extend the life of a transplanted heart.