Zannah: The Heart of a Champion 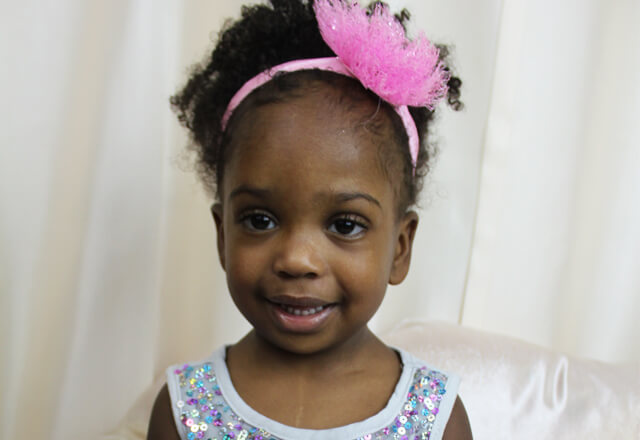 Howard and Carla Simons' story began long before they held their daughter, Zannah, in their arms. A prenatal ultrasound revealed that Zannah had a small hole in her heart. Doctors diagnosed Zannah with a ventricular septal defect (VSD), an abnormal opening between the lower two chambers of the heart, and hypoplastic right heart, an underdeveloped right side of the heart.

At just 15 days old, Zannah's parents noticed that she didn't look very well, and they rushed her to the Johns Hopkins Children's Center Emergency Department. Immediately upon their arrival to the emergency room, Zannah went into cardiac arrest. She had contracted a rare bacterial infection and doctors admitted her to the Pediatric Intensive Care Unit (PICU) and placed her on ECMO, a machine that takes over the function of the lungs and the heart. Doctors gave Zannah 24-48 hours to live.

"The level of care and compassion given by the medical staff gave us hope at Zannah's worst," said Zannah's mother, Carla, "hope that she would get better and we would be able to hold her again."

Zannah's already diseased heart was given time to rest and recover. She pulled through, and remained in the PICU at Hopkins Children's for one month to treat the bacterial infection and recover from the cardiac arrest.

Within the first seven months of her life, Zannah had multiple extended stays at Hopkins Children's. She underwent a number of outpatient procedures and two open-heart surgeries to repair her heart defects. Zannah will continue to be followed by her cardiologist, but today she is a thriving 3-year old who loves to dance and play with her cousin Taylor.

"The Johns Hopkins Children's Center means so much to us. To us Hopkins Children's is a symbol of hope,"  the Simons family explained, "and your support and fundraising efforts will help give many more families like ours access to the best care and trained medical staff. Your efforts will help create more 'miracle' children like Zannah, who is full of life and brings joy to our family each day. She is a true inspiration. She is a survivor!"