Facing a limited supply of donor tissues and organs, scientists seek to grow their own using stem cells and biodegradable materials.

February 2011--Cornea transplantation is the most common transplant procedure. In the United States alone, surgeons perform 40,000 of the operations each year. Corneal tissue, however, is in tight supply in this country, and worldwide there is a dire shortage. But what if medical labs could manufacture artificial corneas from components that are easier to come by?

That project is just one of several under way at the recently established Johns Hopkins Translational Tissue Engineering Center, which draws faculty from the Department of Biomedical Engineering and Whiting School of Engineering and is housed in new lab facilities in the school of medicine’s Smith Building.

Traditionally, surgeons performing tissue transplants have relied upon tissues obtained from organ donors, or they have used grafts of tissue from the patient’s own body (as when a segment of the sural nerve in the calf is used to repair damaged nerves in the arm). But for obvious reasons, such sources of tissue are in limited supply. 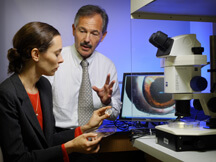 So tissue engineering researchers are exploring how stem cells—with their extraordinary potential to differentiate into different types of specialized cells—might serve as the raw material for tissue transplants. Because an amorphous clump of cells alone does not constitute a tissue, the center’s scientists are experimenting with ways to use biologically compatible materials—such as gels and fibers—to help guide the cells to form different tissues that can function in the body.

The concept of tissue engineering is not new, notes Jennifer Elisseeff, an associate professor of biomedical engineering and director of the Cell and Tissue Engineering Program. Scientists have been working in the field (sometimes called regenerative medicine) for two decades. “But the early plans fizzled,” says Elisseeff. “The primary piece of what was missing before was a practical approach. Pie-in-the-sky promises were made without an appreciation for the complexity in biology and development of these technologies.”

So now, she says, she and her colleagues are trying to focus on both basic research and practical applications. One of those projects is the artificial cornea, which Elisseeff is pursuing in collaboration with Oliver Schein, a Johns Hopkins professor of ophthalmology. The researchers receive funding from the Department of Defense, which is interested due to the high incidence of battlefield injuries that harm the eye.

To build the cornea, Elisseeff begins with a Jello-like substance made from collagen protein. In the lab, she molds this material into the convex shape of the cornea. She then layers over this membrane the three types of cells that make up the cornea—keratocytes, epithelial cells and endothelial cells. The cells, Elisseeff finds, migrate to their proper layers and grow as they would in a normal cornea.

One trick, though, was to produce a clear variety of collagen. Conventional methods of synthesizing the protein normally yield a semi-opaque material—a cornea constructed from such a substance would reveal the world as though through frosted glass. But Elisseeff found a way around that problem, by carefully controlling the speed at which water evaporates during the material’s processing. The result: a transparent collagen gel.

Another center scientist, assistant professor of biomedical engineering Warren Grayson, is focusing on a different type of tissue—bone. To build his constructs, Grayson begins with spongy bone from the cow knee joint. Through chemical processes, he removes all cells from the bone until only a mineral scaffold remains. Using a milling tool, he sculpts this material into the size and shape of the segment to be transplanted, and then he infuses the scaffolding with stem cells and places this material in a special compartment called a bioreactor that provides an environment conducive to the growth of stem cells. During the course of several weeks, the cells grow to fill in the scaffolding with bone tissue.

But that’s only step one, says Grayson. To remain vital, bone tissue requires its own network of blood vessels. That means finding a way to “cocultivate” bone cells and blood vessel cells—a tricky task. “The two cell types require different biological and physiological cues,” says Grayson. “So we’re working on how to coordinate that.”

Yet another scientist at the center, Hai-Quan Mao, associate professor of materials science and engineering and biomedical engineering, is developing biomaterials and methods to regenerate and repair nerve tissue. Normally, nerve cells are surrounded by a scaffolding of proteins and sugar residues, which help regulate the growth of those cells. So Mao is attempting to replicate this extracellular microenvironment using biodegradable polymers. Through a method called electrospinning, he forms the polymer into minute fibers of diameters less than a micron. He then seeds neural stem cells onto the fibers.

But Elisseeff says it’s one thing to construct a tissue in the controlled environment of a research lab, and quite another to demonstrate that the technology can be translated to patients, with all their variability. One concern, she says, is that many of the candidates for engineered tissue transplants are likely to be elderly or to have one or more degenerative diseases—situations that could diminish the success of a tissue transplant.

Other, more practical challenges lie ahead, as well, such as moving the technologies through the many steps of the FDA approval process.

“Tissue engineering doesn’t have a great history of making a clinical impact,” says Elisseeff. “So there’s a strong need to show we can do that and improve patient care.” As for when that last step will take place, Elisseeff estimates that technologies spawned from the center’s labs will begin to be introduced into clinical practice within the next five years to 10 years. Some, she says, are already in clinical testing.

Warren Grayson on regenerating our own body parts

Induced Pluripotent Stem Cells: Not Yet the Perfect Alternative

The Molecular Perspective on Stem Cells