In This Section
Home > Division of Adult Hematology

The next William R. Bell Lecture has been confirmed for November 11, 2019 at noon in the Weinberg Auditorium in the Sidney Kimmel Comprehensive Cancer Center on the Johns Hopkins East Baltimore campus. 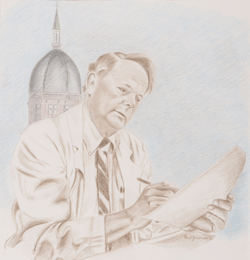 Dr. William R. Bell (1935-2013) was a master clinician, an internationally acclaimed hematologist and a professor and researcher at The Johns Hopkins Hospital since 1974.

“He loved working at JHH and was most passionate about his patients and working with colleagues committed to excellence in patient care. He has been credited with relief of suffering and many miracles from beloved patients through the years," states his wife of 47 years Dr. Barbara Bostock Bell, semi-retired pediatric cardiologist. "He was a disciple of Sir William Osler and believed astute observation, keen listening skills, and compassion with competence are the essentials of a physician. He taught his students by example and inspiration not to confuse knowledge of treatment of a disease with treatment of a patient with a disease."

Dr. Bell’s third home was the University of Notre Dame where he served on the College of Science Council for many years and where he received the Sorin award for lifetime achievement and contributions to humanity in 2000. 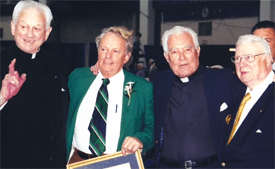 The following quotations from the obituary in the Baltimore Sun newspaper October 17, 2013 written by Fred Rasmussen with quotations from Dr. Jerry Spivak capture the spirit and contribution of this unique physician.

"Normally we stay in our field of medicine, but Bill would see anyone who was sick and came to him. He'd give and give and give. He was a hardworking physician and over- caring for his patients is what he lived for," said Dr. Jerry Spivak, a JHH hematologist who was chief of the hematology department from 1980-92. "If you were ever sick, you'd want Bill Bell for your doctor. He was tireless."

Dr. Bell could “lay claim for launching the career of many of today’s brilliant hematologists” said Dr. Spivak. “He was an expert on bleeding and clotting. He was a real scholar and a prolific writer on the subject. He knew it all.”

During his career he published more than 380 articles on hematology and thrombolytic therapy in medical journals and contributed chapters to numerous textbooks. He was a primary Investigator in the national pulmonary embolism research study and was instrumental in dramatic improvement in the treatment of thrombotic thrombocytopenia purpura.

In order to honor and promulgate his memory, his family and colleagues wish to establish a lectureship in hematology at The Johns Hopkins Hospital.

Give to the William R. Bell Lectureship