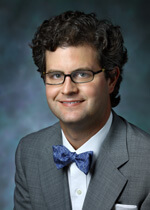 Christopher Abularrage, MD, Is
a vascular surgeon at Johns Hopkins. Watch the video.

James Black, MD, Is a vascular surgeon at Johns Hopkins. Watch the video.

What is an abdominal aortic aneurysm?

An aortic aneurysm is a weakening of the abdominal aorta, which is the main blood vessel of the body. It tends to occur over time as a consequence of aging or of various diseases of the connective tissue, disorders that help to build the structure of the aorta itself. The aneurysm in general usually implies that the vessel is dilated to over twice its normal diameter and usually is at risk for rupture or a tear that could cause a significant injury to the patient.

What is a thoracic aneurysm?

It’s not completely understood how aortic aneurysms develop. In some cases, it’s related to a history of smoking; in other cases it’s related to genetic disorders such as Loeys-Dietz syndrome or Marfan syndrome, where there’s an abnormal breakdown of the aortic wall which results in a ballooning of the aorta itself.

How is an aneurysms diagnosed or detected?

Aortic aneurysms are typically found incidentally, meaning that the patient didn’t know that they had it. It can be felt on a physical exam of the abdomen as a pulsatile mass or it can be seen on an ultrasound or a CAT scan.

What are the symptoms of a thoracic aneurysm?

An aneurysm within a chest, those being thoracic aortic aneurysms, give patients chest pain. The chest pain itself can be rather pulsatile in nature, a pounding sort of pain, often times in the front of the chest or between the shoulder blades towards the spine.

What are the symptoms of an abdominal aneurysm?

In the abdominal aorta, the symptoms can also be quite diverse, but in general usually it’s low back pain, or perhaps pain in the center of the abdomen, again quite classically it tends to be pulsatile in nature, or pounding with every heartbeat, more so than a typical ache and pain that one might experience with raking the leaves or shoveling too much snow.

Who is at risk for developing aneurysms?

Smoking is the greatest risk factor both for the establishment of aneurysms as well as their growth once an aneurysm has been diagnosed. The correlation between smoking and aneurysm is quite great, to the point now, that in the past several years, Medicare has allowed a one-time screening for patients at age 65 years of age who have a history of smoking to rule out an abdominal aortic aneurysm before, of course, it becomes symptomatic and leads to trouble.

Are there other risk factors?

People at risk for aortic aneurysmal disease include patients who are over the age of 50; it’s more likely to be found in men than women; and it can also be found in certain genetic disorders such as Loeys-Dietz syndrome or Marfan syndrome.

What role to high cholesterol and genetic disorders play in aneurysms?

The most common cause of aneurysms in general is related to smoking and hypertension. We also now are beginning to understand that high cholesterol also plays a role in the development of aneurysms. At Hopkins, we have a very long and established track record of dealing with patients who have genetic disorders which lead them to inherited weaknesses of the aorta as it runs through the chest and the abdomen and require surgery at earlier ages than we would typically see in patients who are smokers or who have high blood pressure who are coming to require aneurysm treatment in their 60s.

When are aneurysms treated?

In the thoracic aorta, we generally draw the line at six centimeters to repair a thoracic aortic aneurysm whether we are doing it with an open repair or an endovascular repair. However, if we see a thoracic aortic aneurysm as growing rapidly, such as growing 5 millimeters in six months, or even a centimeter in a year, we may very well intervene upon that patient at a diameter less than six centimeters in size, for fear that the rapid growth rate of the aneurysm is predicting a higher risk for rupture in the future.

What are the tests to determine treatment for aneurysms?

Ultrasound is the most common screening test for abdominal aortic aneurysms. Once you get close to having an aneurysm that needs to be repaired, CAT scans are ordered, because these tell us more definition about the anatomy and whether you are a suitable candidate for a minimally invasive, endovascular repair.