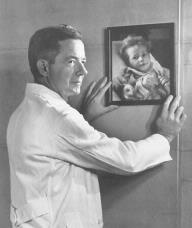 One of the photographic studies done by Yousuf Karsh to mark the official "1000 blue baby" procedure performed by Dr. Alfred Blalock. Portrait by Yousuf Karsh, ©Karsh

In 1944 doctors at Johns Hopkins performed the surgery that opened the door to today's heart surgery. Working together, The Johns Hopkins Hospital's chief surgeon, Dr. Alfred Blalock, and pediatric cardiologist Dr. Helen Taussig devised a means for improving the flow of oxygen into the blood by connecting one of the heart's major arteries with another feeding into the lungs. Known as the Blue Baby Operation, it brought relief to a young girl plagued with a combination of heart defects that kept her blood so starved for oxygen that her skin was literally blue. In time the procedure not only helped save the lives of thousands of similarly afflicted children around the world, but also opened the door to now-familiar procedures like coronary bypass surgery.

In the 1950s doctors and scientists at Hopkins developed the first cardiac defibrillator and discovered cardiopulmonary resuscitation or CPR. While defibrillators today with their metal paddles are a familiar feature of hospital emergency rooms and ambulances almost everywhere, CPR has been credited with saving hundreds of thousands of lives. In the 1970s researchers at Hopkins helped refine pacemaker technology when they invented the first implantable device that could actually be recharged inside the body. A decade later they developed the first implantable defibrillator to help those with unpredictable and potentially fatal irregularities in their heartbeat. Known today as an ICD, the tiny devices have been credited with saving thousands of lives. 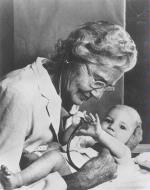 Over that same time period other research at Hopkins helped improve the diagnosis and treatment of heart disease by working not just outside the heart, but inside it as well. Small probes that could be threaded through veins and arteries gave heart doctors a way to actually look and work inside the heart, making a whole range of new diagnoses and new treatments possible. Known as cardiac catheterization, the technique created a new field in cardiology known today as interventional radiology.

In the 1980s cardiac specialists at Hopkins working with children developed balloon angioplasty -- inserting a balloon-tipped probe into the arteries feeding the heart and then inflating it to clear blockages. Like the first open heart surgery pioneered at Hopkins during the Second World War, this new technique quickly became a common procedure for the treatment of adult heart problems as well.

Heart doctors at Johns Hopkins also played an important role in developing the field of clinical genetics. Intrigued by the clustering of abnormalities he saw in heart patients, particularly those with Marfan's syndrome, a genetic disorder that stretches the body's connective tissues and often damages the aorta, Victor McKusick began studying genetics and mapping the locations of genes, tracking how their abnormalities expressed themselves and caused disease. In time his research at Hopkins expanded to include not just Marfan's syndrome, but hundreds of other genetic disorders as well. By establishing a clear link between genetic disorders and certain medical problems, his work helped open the door to modern gene therapy. Rather than just treating the symptoms of inherited diseases -- including some forms of heart disease -- doctors today are working to actually cure them through techniques such as gene therapy and gene replacement. 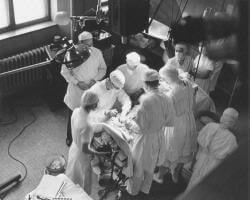 Dr. Blalock and his surgical team, performing one of the first shunts.

That tradition of pioneering work continues at Johns Hopkins with physicians and researchers working in almost every field related to cardiovascular disorders, from transplant surgery to prevention. The hospital receives more federal research funding than other medical institution in the country and its cardiology department has been specially recognized for its work. Each year the National Institute of Health awards just ten SCORE (Specialized Center Of Research Excellence) grants to medical institutions nationwide. Cardiologists at Johns Hopkins have managed to win two of those ten awards for their studies of coronary artery disease and the causes of sudden cardiac death.