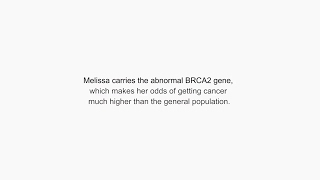 Genetic testing for the BRCA gene has led Melissa to aggressively take action to prevent her of developing breast cancer. Her story begins when she discovered that members of her family had tested positive for the BRCA2 gene through genetic testing. Being Jewish can put you at high risk for breast cancer. Jewish women and men of Eastern European descent (Ashkenazi Jews) often have a higher percent of the protein BRCA1 and BRCA, which went damaged, does not perform their proper function. Learn more about our Breast Cancer Program.