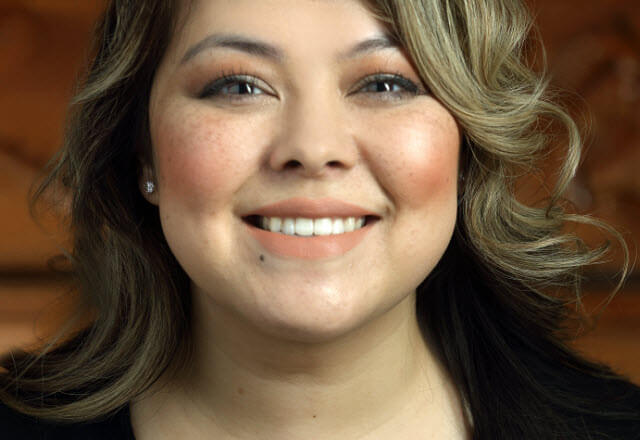 Kristin, after her scarless thyroidectomy performed by Jonathan Russell, M.D.

When Kristin Sepulveda got a computed tomography scan (CT) of her head and neck for a bacterial infection around her ear, the exam also revealed a spot on her thyroid gland. At the time, the calcified lesion didn’t attract too much notice.

But two months later, Kristin’s primary care doctor noticed the findings on the report, and saw that the spot met the criteria for a closer look. She recommended a follow-up ultrasound and then a biopsy. Within days of that test, Kristin found out she had thyroid cancer.

“I knew the news was not good as soon as my doctor walked into the room,” she says.

The diagnosis caught Kristin, 32, off guard. “When you’re younger, you don’t expect this. We think about uterine cancer, ovarian, breast—but thyroid tumors aren’t on your radar,” she says.

As concerned as she was, Kristin, who works at Johns Hopkins, also had her situation in perspective. She knew that this particular cancer was treatable with surgery.

She sought help from Jonathon Russell, M.D., a head and neck surgeon at Johns Hopkins’ Department of Otolaryngology - Head and Neck Surgery.

Russell says, “If there’s anything nice you can say about thyroid cancer, it’s a slow-moving disease. No cancer is good cancer, but when we find thyroid cancers early, we can successfully manage them in up to 98 percent to 99 percent of cases.”

“Everyone around me was trying to be positive,” Kristin says. “I had a good support system. My co-workers were great. But everyone at my job was shocked to hear the word ‘cancer.'" 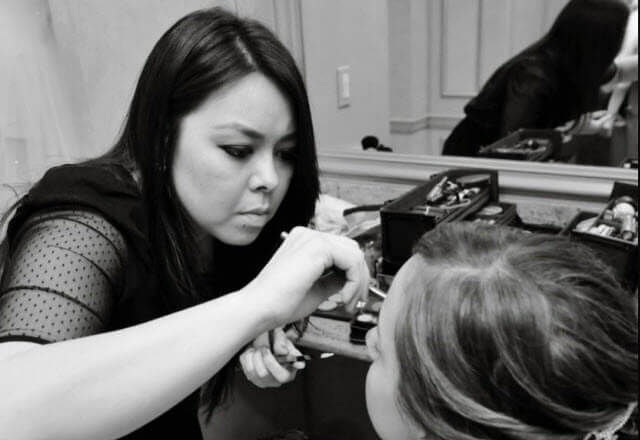 The typical surgical approach to the thyroid gland is through the front of the neck. The resulting scar can be large — up to several inches — and difficult to conceal.

Russell, however, had an alternative: He had expertise in a new, scarless procedure that accesses the gland from inside the throat.

Kristin, who had heard about the new approach, thought it over.

It took me a few days to decide whether or not I wanted the new procedure or a traditional approach. But I knew Dr. Russell has a great reputation.

She also considered her side business, doing professional makeup for brides and actors. “When you work in that world, you don’t want to have to tell your story to everyone when they notice a scar.”

Still, it wasn’t an easy choice. “In Kristin’s case, we were very concerned about the location of the tumor,” Russell says. “It was very close to the laryngeal nerve. Damaging that nerve could have lasting effects on Kristin’s voice.”

He carefully planned out each stage of the operation, including the use of a minimally-invasive robotic system to perform the procedure, which can also be performed with a laparoscope. Kristin would be the very first patient in the United States to have head and neck cancer removed by the robotic method.

Kristin decided to go for the newer option. She scheduled her procedure with Russell, and her mother flew in from California to help her with the family.

Though the surgery took longer than normal, Russell was pleased with the immediate results. He says, “She did extremely well. We were worried about the position of the lesion, but it was easier than we anticipated to protect the nerve while we got the cancer out.”

Immediately after surgery, Kristin says, she had some swelling in her neck, a normal effect of the procedure, but which she had to try and explain to her 3-year-old. “I also had some bruising and some stitches inside my mouth, and my jaw was sore.” She had to rely on liquids, shaved ice and soup for a few days while the healing began.

It took a while to get back to feeling like herself. “I was very tired after the surgery. With one half of the thyroid removed, the other half had to compensate,” she explains. “It took a good two weeks before my energy was coming back.”

Since Kristin’s thyroidectomy, Russell has performed about 30 more operations like it, about one each week. He is already noting that he is able to complete the operation in less time than it took to remove Kristin’s cancer.

Five months after her procedure. Kristin feels like her health has improved. “I feel different, in a good way,” she says.

“Before the surgery I had a lot of fatigue and cognitive inattention, trouble focusing, sweating. I don’t know if that had anything to do with the lesion, but I feel like the surgery helped my body balance itself out. Even though my thyroid hormones were in normal range before I had the surgery, I felt intuitively like something wasn’t right.”

On the left, a traditional thyroidectomy scar across the neck. On the right, Kristin's neck, four weeks after her scarless thyroidectomy procedure.

“It’s kind of ironic,” Kristin says, “but the very day I had my biopsy I also found out that I’d gotten into my chosen MBA program, so it was two major events within 24 hours. Because of my diagnosis I had to delay school for one term, but since my surgery I’ve started my classes.

“I’m working full time, raising a family, and working toward my degree,” she says. “I feel pretty much 100 percent.”

Thyroid cancer is disease in which cancerous cells are found in the tissues of the thyroid gland. There are several types of thyroid cancer with varying forms of aggressiveness and prognoses. Learn about thyroid cancer.

Our experts in the head and neck endocrine surgery team diagnose and treat patients with a variety of thyroid and parathyroid conditions including tumors, nodules and hyperparythroidism. Learn about our center.

Thyroid Cancer: What Women Should Know