After leaving her doctor’s office in Taiwan, Esther Wong knew she needed a second opinion.

At a routine physical in September, Esther’s doctor noticed something concerning under her tongue and sent her to see a specialist. The otolaryngologist she saw attempted a biopsy but had difficulty gaining access to the affected area. She was diagnosed with salivary gland cancer, and her doctor recommended surgery.

Esther was told to expect a very invasive procedure that would leave scars on her face. She might even need to have some of her teeth removed for the surgeon to access the tumor.

The last straw for Esther was the news that the surgery could damage her voice box and leave her without the ability to speak. This was unacceptable to the middle school teacher at Taipei American School, who wasn’t willing to risk ending her teaching career, her true passion.

Knowing Esther spent 15 years living in Maryland, the principal of her school asked why she didn’t go to Johns Hopkins for a second opinion. After consulting with her husband, Esther quickly made an appointment in the Department of Otolaryngology-Head and Neck Surgery.

By December, Esther was back in Maryland for a second opinion. She walked into the offices at Johns Hopkins and was quickly met with a hug by Tanya Bridges, with whom she had corresponded and coordinated with from Taiwan. Esther felt at ease and knew she was in the right place.

Tanya knew Esther had traveled a great distance and was eager to return to the classroom, so she organized Esther’s visit to ensure that she had all of her appointments on the same day. Here she met her treatment team — including salivary gland cancer expert David Eisele, M.D., director of the department.

The team agreed that the tumor was in a challenging place and told Esther that she was a perfect candidate for robotic surgery. She eagerly agreed to the treatment plan. The Johns Hopkins Hospital was one of the first American medical centers to offer robotic surgery as an option for certain head and neck cancers, and patients like Esther have greatly benefited from the technology.

Recent advances in technology allow the head and neck robotic surgery team to access tumors in difficult-to-reach areas such as the back of the tongue, tonsils or throat. The robotic surgery team uses a guided endoscope to provide a high-resolution image of the area around the tumor. Then, using two robotically guided instruments that act as a surgeon’s arms, our experts are able to safely access and remove the tumor. After successful surgery, Esther, like most patients who have robotic surgery, only spent one night in the hospital — compared to a week for patients who undergo traditional surgery.

Back to the Classroom 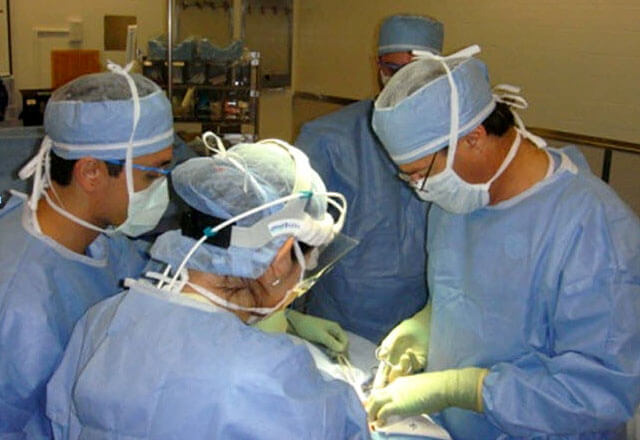 Esther was relieved that her recovery would be quick because she was eager to return to her students, who were rooting for her from across the globe.

Esther began counting down the days until she could return to her class, and after only two weeks, she was on a plane bound for Taiwan where her students eagerly awaited her return.

For Esther, robotic surgery was a gift. It removed the cancer without harming her voice and got her back to her family and students sooner.

“Robotic surgery,” she said, “is definitely a wonderful thing.”

Salivary gland cancer is a disease in which cancerous cells are found in one of three main types of salivary glands (parotid glands, submandibular glands, sublingual glands).
Learn more