Facing ovarian cancer, Julie fought hard to regain her health — with the help of a caring surgeon and a collaborative team.

The pain in her lower belly had been nagging Julie Baird for over a year. It wasn’t severe, and it wasn’t constant, but Julie was looking for an explanation and some relief. Tests didn’t reveal any problems, but the pain didn’t go away.

Then, one weekend in October 2017, things escalated. Julie recalls, “I was having severe chest pains when I’d bend over. I went to the emergency room and doctors found that I had fluid around my left lung. After other tests, they said I needed to be admitted.

“Lesions on my liver and other places is what they said.”

A Diagnosis of Ovarian Cancer, and a Plan

While she was in the hospital, Julie underwent a series of tests. The results brought the diagnosis: cancer in both ovaries, which had spread to Julie’s lower abdomen.

The news was devastating. Her husband had died years earlier, and she couldn’t imagine her two daughters having to face the loss of their other parent. “I was in a pretty dark place,” she admits.

Julie’s oncologist recommended the Kelly Gynecologic Oncology Service. Julie didn’t have to wait long to connect with her new doctor, Rebecca Lynn Stone, M.D., M.S. Stone called Julie at home on a Sunday, and assured her that she had a plan.

Stone explains: “In treating ovarian cancer, sometimes we do surgery first, followed by chemotherapy. In other situations, like Julie’s, when the cancer has spread to certain areas, we use a ‘sandwich’ approach: chemo, then surgery, then chemo.”

Testing and Treating the Ovarian Tumor

Together, Julie and Stone swung into action. A biopsy showed that the cancer was growing on the outer layers of Julie’s ovaries and spreading to other organs. This level of cancer is classified as stage 4a. Genetic testing of the cancer revealed the cells had a mutation that meant Julie had a good chance of responding to treatment.

Julie would undergo three three-week rounds of chemotherapy to shrink the tumors before surgery. She enlisted friends and family to help, delegated everything she could, and plunged into the regimen.

It wasn’t easy. “Nausea was tough,” she says, “and after the first nine weeks I needed medications to support my blood cells and a transfusion. But we only had to delay the chemo for one week.”

When Julie lost her hair in December, she and her daughters got an assortment of crazy wigs, and wore them.

“You have to find humor where you can,” Julie laughs.

Julie and her family enjoying the outdoors

On February 7, 2018, Julie underwent 10 hours of surgery. The team removed all of Julie’s reproductive organs and small areas of cancer from her stomach and liver. Stone didn’t work alone. A gastrointestinal surgeon helped to remove Julie’s gallbladder, spleen and omentum, a curtain of tissue that covers the abdominal organs — and can provide a hiding place for cancer cells.

In addition, two sections of her colon were removed, requiring an ileostomy—a surgical opening in the intestine connected to a bag worn outside the body to collect waste.

Stone explains: “Sometimes, imaging will show us all the areas that need to be treated, and we’ll work on the surgical plan with surgeons in other specialties, such as thoracic (chest), endocrine (glands) or hepatobiliary (liver). Other times, we can discover the involvement of other areas once we’re in the operating room, and call in other specialists at the last minute.

“Either way, the Weinberg surgical center is a collaborative environment. All of us have trained at major cancer centers and are used to working together successfully.”

Stone called Julie’s daughters and told them she and her team had gotten it all.

“This was big surgery, but I got amazing care at The Johns Hopkins Hospital,” Julie says. “Dr. Stone is just stellar."

Dr. Stone is a great surgeon and a great woman. She saved my life."

The test of Julie’s spiritual strength wasn’t over. After a long recovery from surgery, she had to start another nine weeks of chemo, and it was harder this time. She needed several blood transfusions. Her platelets dipped. She developed blood clots in her lungs and legs, requiring the placement of a filter in her inferior vena cava — a major vein that carries blood from the lower and middle portions of the body into the heart.

Seven weeks into the nine-week chemotherapy course, Julie’s oncologist, Andrew Scott Mener, M.D., let her off early as a result of these complications. Her ileostomy was reversed in June, and the vein filter was removed in August. She had already returned to her full-time job at Johns Hopkins the month before.

To lower the risk of this particular cancer returning, Julie’s oncologist and Stone prescribed olaparib, a PARP inhibitor. PARP inhibitors are drugs that prevent cancer cell DNA from repairing itself, causing the cells to die. Olaparib was approved in December 2018 by the FDA for treating first bouts of cancer.

Stone notes that Julie will probably take the PARP inhibitor for the rest of her life. “PARP inhibitors have the potential to cut cancer off at the knees, using biology.” 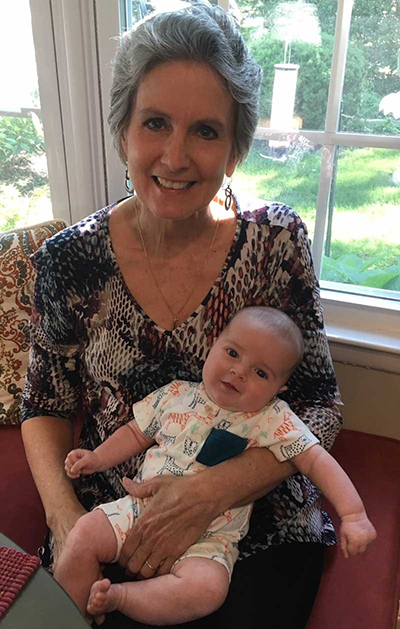 Julie and her new grandson

Julie says she’s relied on her faith and her positive attitude throughout her illness and recovery. “At one point I asked [Stone’s] team if they were praying people, if they believed in some kind of higher power, since I’m a faith-based person, and they were all open to that.”

These days she opts for cleaner, more organic foods, and cares for her body and soul through mindfulness practices, yoga, staying in the moment as much as possible and getting a good night’s sleep.

Now that she’s stronger, Julie says going through cancer has only increased her resiliency, which she’s glad to share. She joined the same peer mentoring program that supported her, walking with other women who are navigating the ups and downs of cancer and its treatment.

Spring 2019 brought Julie another reason to celebrate her new lease on life: Her first grandson was born on March 9.

Julie is grateful to Johns Hopkins and the surgeon who had a plan from the start. “Dr. Stone is a great surgeon and a great woman. She saved my life.”

The Johns Hopkins Kelly Gynecologic Oncology Service is a team of world renowned surgeons, medical oncologists, researchers and cancer experts who use the most innovative treatments and surgical approaches to treat women diagnosed with a gynecologic cancer.