Carol Rudy knew her life was better when she heard her husband making an annoying sucking sound with his teeth.

Though the noise irritated her, she was just happy that she could hear it.

Carol suffered from severe hearing loss for decades.  As a baby in the early 1940s, her pediatrician accidently punctured her eardrum, and she has a family history of hearing loss. After turning 50, she began to see doctors and wear progressively more powerful hearing aids.  This went on for 20 years, and around the time she turned 70, even the strongest hearing aids weren’t helping.

Her four children encouraged her to consider receiving a cochlear implant.  Carol hesitated.  She wasn’t ready.

“The unknown is terrible,” she said.  “You just can’t imagine what’s going to happen.”

Despite her fear, with near complete hearing loss, Carol also knew she wasn’t herself anymore.

“I didn’t want to go to church anymore, because I couldn’t hear,” she said.  “You just don’t want to go out.  You become antisocial.”

It's given me a new lease on life, and I'd do it again. I enjoy my grandchildren. I'm joining the world again." 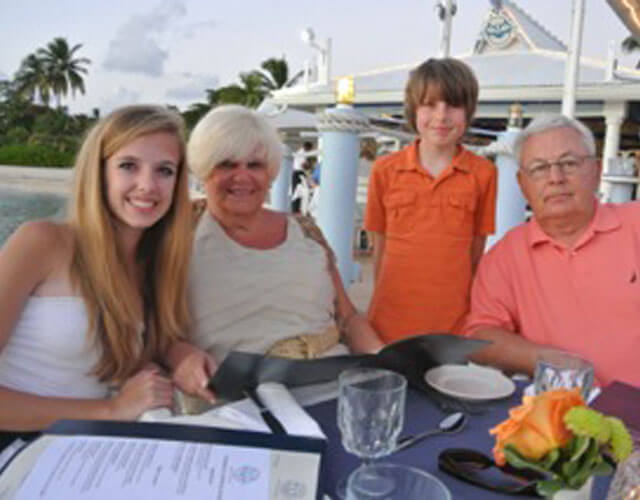 “Hearing loss may have a profoundly detrimental effect on older people’s physical and mental well-being, and even health care resources,” says Frank Lin, M.D., Ph.D. of the Department of Otolaryngology-Head and Neck Surgery in a recent research study.  ”Our results underscore why hearing loss should not be considered an inconsequential part of aging, but an important issue for public health.”

According to Lin, as many as 27 million Americans over age 50, including two-thirds of men and women aged 70 years and older, suffer from some form of hearing loss.

For Carol, she finally decided she was missing too much.  She wanted to enjoy her eight grandchildren, resume her active church life, and take family vacations.

Carol remembers a doctor’s appointment she had prior to receiving the implant when she couldn’t hear the physician.  He put his stethoscope into her ears and talked into the chest piece.  It was the only way they could communicate. Carol always had a family member at these appointments to make sure she didn’t miss anything important.  She wasn’t able to completely take care of herself.

So, at age 72, Carol had cochlear implantation surgery in her right ear in May 2012.  Her life changed the moment she left the hospital. Before the cochlear implantation, Carol couldn’t even enjoy activities with her grandkids like going to see a movie.  Shortly after the movie began, she would fall asleep.  This quickly became a family joke about how grandma couldn’t stay awake to watch a movie.  She wanted to, but she couldn’t hear.

In the car on the way home, she could hear the windows going up and down and the windshield wipers moving back and forth.  These were simple, everyday noises, but for Carol, they were sounds she hadn’t heard in years.

“It’s given me a new lease on life, and I’d do it again,” she said.  “I enjoy my grandchildren.  I’m joining the world again.”

It’s been a little more than a year since Carol’s procedure, and she is excited about her new perspective.  She’s already planning a family trip to England, and has already been to the movies twice.

“And I didn’t fall asleep,” she added proudly.

“You know, it’s just little things that you can hear now that makes you feel like you’re human,” Carol said.  “It’s little things.  When it’s raining at night, I can hear the rain on the roof.”

Although Carol is back to her happy, sociable self, it took time for her to fully adjust to her implant and feel comfortable hearing conversations.  For the first two months, she went back to Johns Hopkins every other week to work with audiologist Steve Bowditch.  He made adjustments to the implant and worked to make Carol comfortable with using the implant to hear.  Now, she sees Steve once every six months.

“They told me what to expect (before surgery),” she said.  “It will take a few months.”

For the first few months, Carol had difficulty understanding the television.  She was told to watch the news instead of sitcoms to help her implant process the voice of one person talking.  Even now, more than a year after surgery, she uses a special phone that helps amplify the volume of the person on the other end of the line.

“In the beginning, the hearing aids really worked for me,” Carol said.  “But, in the end, there’s really no comparison.   “I’ll never be able to hear normally, but it’s a heck of a lot better than it was before.”

Now Carol is back doing the things she loves the most – enjoying her grandchildren who range in age from 2 to 23.

“I can hear my grandchildren, you know, that’s what makes the world go round,” she said.  “I missed so much.  It’s such a shame I didn’t do this before.”

Carol’s happiness and regained independence made the surgery and rehabilitation visits well worth it.

“I think it’s the best thing that ever happened to me,” she said.  “Even if I only had a couple of months to live, it would be worth it.  We don’t know how long we’re going to be on earth, but it sure is nice being able to hear while we’re here.”

Dr. Frank Lin's research shows that seniors with hearing loss are significantly more likely to develop dementia over time than those who retain their hearing.
Read about the study

Our center offers a comprehensive approach to cochlear implantation and rehabilitation. Working with patients of all ages, our staff and faculty are committed to providing a comprehensive network of servcies to help each of our patients.

Learn more about the treatment team and how they can help you.