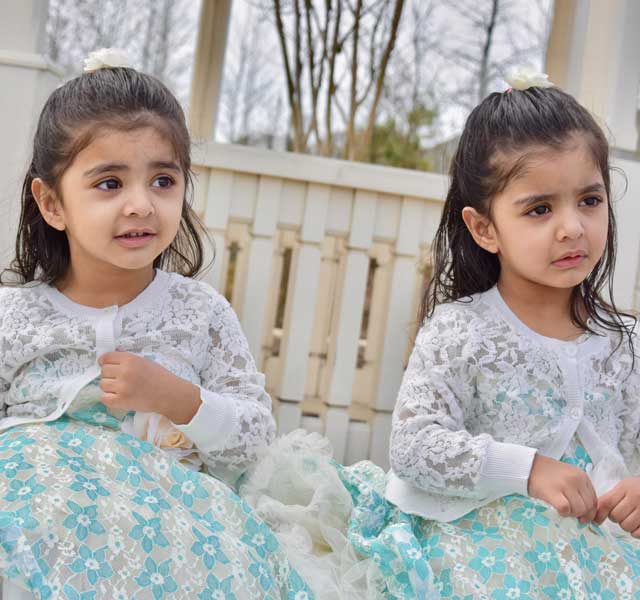 As a healthy 29 year-old expecting twins, Simarjeet Kaur of Silver Spring, Maryland, experienced symptoms common during pregnancy. She felt nauseated and tired early on. But soon her symptoms worsened, and she developed an unexplained pain in her side.

“I went to different doctors and they didn’t know what was wrong,” Simarjeet says. “They thought it might be a kidney stone, but nothing showed on the ultrasound.”

Looking for answers, Simarjeet went to Johns Hopkins at week 18 of her pregnancy to have a detailed ultrasound. She’d had another ultrasound just a week before, which showed the twin babies as healthy and normal.

But the second scan showed that just within that week, the twins had developed twin to twin transfusion syndrome (TTTS), a complication that can affect identical twins who share a placenta.

The problem results in an imbalance of fluid components in the blood circulating between the two fetuses, with one getting excess fluid, and the other becoming dehydrated. Simarjeet’s twins were at stage 3 of TTTS, meaning the problem had progressed to the point where the babies’ heart and circulatory systems were at risk.

“I was completely shocked; I felt frozen. I just had my ultrasound a week before, and within one week the condition had formed,” Simarjeet says.

Soon after receiving the ultrasound and diagnosis, Simarjeet met Jena Miller, M.D., a maternal-fetal medicine specialist in the Johns Hopkins Center for Fetal Therapy, who suggested she have fetoscopic laser surgery the following morning.

Suddenly facing urgent surgery, on top of worrying about the safety of her unborn babies, overwhelmed Simarjeet. “That day was a very difficult day, and so was the day and the night before,” she remembers.

“I was very scared, but I didn’t want to think anything negative. I just focused on doing everything possible for their well-being.”

Ahmet Baschat, M.D., director of the center, performed the surgery by closing the blood vessels that connected the babies’ circulatory systems and taking out extra fluid that had collected around one of them. The procedure lasted about 45 minutes. Simarjeet was in the hospital for one day of preparation, and then two days for recovery.

Following the procedure, Simarjeet came back to Johns Hopkins every week for ultrasounds. “Everybody was very good when I had to go in for ultrasound. The ultrasound tech, Sarah Millard, was really nice. She went into detail and explained everything.

“She is the one who introduced me to Dr. Miller, and she was taking her time and explaining everything,” Simarjeet says. “I’d been to other places where the ultrasound techs don’t say anything, but Sarah brought the doctor in when she saw a concern.”

Miller says teamwork is a guiding principle in the Center for Fetal Therapy, noting, “We are privileged to have a tight partnership among our team, which includes physicians, sonographers and nurses. Because we see such a high volume of complex cases, we can identify problems and initiate treatment very efficiently, as we were able to do for Simarjeet’s twins.”

Extra Safeguards for a High-Risk Pregnancy

At the suggestion of the fetal therapy team, Simarjeet also began seeing a high-risk obstetrics expert at Johns Hopkins for care.

Working together, the fetal therapy team looked after Simarjeet’s health. At 25 and 30 weeks, she received steroids to help protect the twins in case they were born early. Three weeks after the initial surgery, Simarjeet experienced heavy bleeding and was admitted to The Johns Hopkins Hospital, where she was put on bedrest.

“I had a couple of other complications: vasa previa, placenta previa and a risk of bleeding. Dr. Baschat, the high-risk obstetrics expert, and a large team monitored my pregnancy very closely,” Simarjeet says.

“Every day I was counting, reminding myself that I was making progress. It was very stressful, but at the same time I had confidence in Johns Hopkins and the doctors. Every week that passed, I felt more hope.” 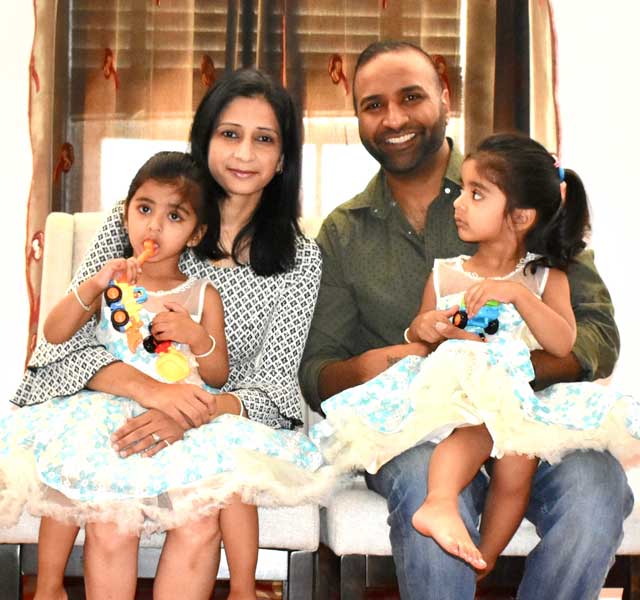 At 33 weeks, on Feb. 10, 2017, Simarjeet gave birth to two girls named Sahej and Sifat at The Johns Hopkins Hospital. The whole care provider team was at her side.

The babies were released from the hospital after a three-week stay in the neonatal intensive care unit, and her family was glad to welcome them home.

“The girls are doing great. They are doing everything according to what other full-term babies their age do,” Simarjeet says. “The twins enjoyed the pool this year and they love playing outside and listening to me read them books.”

TTTS is a rare pregnancy condition that occurs in identical twin pregnancies in which there is an imbalance in the blood exchange between the twins.

Ahmet Baschat and his team of highly skilled and compassionate physicians address the rarest and most challenging fetal conditions with leading edge medical and surgical treatments and a family-centered approach.