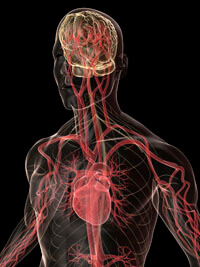 The Renin Angiotensin System (RAS) is a major hormone system with a crucial role in physiologic and pathophysiologic mechanisms in almost every organ system, including brain, liver, kidney, bones, heart, and blood vessels. It is regarded as a key regulator of hypertension, cardiovascular disease, and renal function. Evidence strongly supports that Angiotensin II (Ang II) promotes inflammation and the generation of reactive oxygen species and governs the onset and progression of vascular senescence, which are all associated with the functional and structural changes that lead to age-related diseases.

At the Johns Hopkins Division of Geriatric Medicine and Gerontology, researchers are focusing on understanding the effect of age-related changes in the renin angiotensin system as a critical part of the aging process and a potential cause for age-related diseases.

The objective of the research is to evaluate relationships between AT1R and AT2R in immune system cells as people age and determine how these changes may influence chronic inflammation, frailty, and late-life vulnerability. Genetic and hormonal features that may contribute to the development of chronic inflammation via the angiotensin receptors' pathway will also be identified. Angiotensin receptor autoantibodies and their role in chronic disease propagation in older adults are under active investigation.

Researchers are pioneering research that spans the gamut from basic pathophysiology experiments in cell cultures to genetically engineered animal models that lack AT1 or AT2 receptors, to clinical human studies aimed at elucidating the role of angiotensin II type 1 and 2 receptors in aging, using blockers to the system.