A doctor from the Netherlands travels to Johns Hopkins for a life changing weight loss procedure. 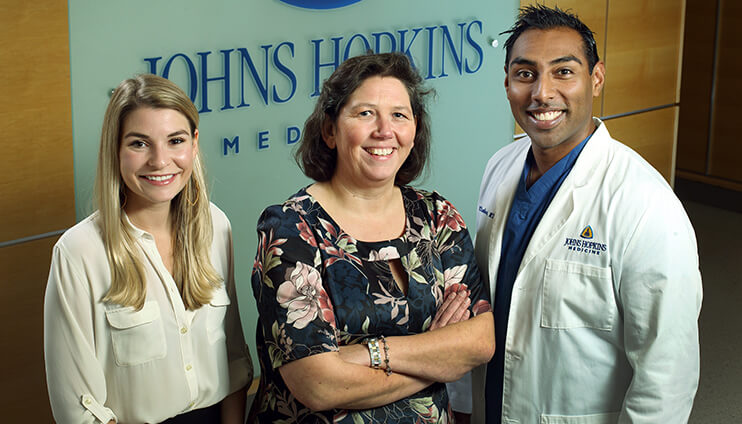 She found a glimmer of hope while traveling for work and reading a scientific paper during a flight to the United States. It described endoscopic sleeve gastroplasty (ESG), a new, minimally invasive weight loss procedure. The procedure uses a suturing device attached to an endoscope — a thin, flexible tube with a tiny camera and light — to reduce the size of the stomach by 70 percent. The smaller, tube-shaped stomach restricts the amount of food you can eat and the number of calories your body can absorb.

“I turned to my colleague who was traveling with me and said, ‘Look at this, you literally go in and out the same day,’” recalls Vivienne.

It wasn’t until a few months later that her frustration about her weight led her to search online for more information about ESG. She landed on the Johns Hopkins website, where she learned that ESG was among the minimally invasive weight loss procedures being done as part of the Johns Hopkins Concierge Endoscopic Weight Loss program.

She emailed and then talked by phone with Margo Dunlap, R.N., a clinical registered nurse and the program coordinator, to learn more about the procedure and Johns Hopkins’ comprehensive program. The program goes beyond the procedure and includes a year of support and coaching from a team of weight loss experts. Dunlap emails and talks with patients by phone twice a month. A medical internist, nutritionist, exercise physiologist and a behavioral psychologist help patients make lifestyle changes to lose weight and keep it off.

ESG is safe and effective, and also has a short, three-day recovery. It’s currently the most effective endoscopic method for weight loss, and it’s suitable for almost everyone.

Vivienne scheduled a consultation with Vivek Kumbhari, M.D., the director of bariatric endoscopy. Most consultations with out-of-town patients are done by phone for the patients’ convenience. But Vivienne wanted to meet with Kumbhari face-to-face. It paid off. She left feeling confident that the procedure and the team would help her make the lifestyle changes needed to lose the weight for good.

Kumbhari assured her those dinners weren’t off the table. She’d be able to eat whatever foods she wanted — even have a glass of wine — just in smaller portions.

Kumbhari, who trains doctors worldwide in the procedure, says Vivienne was an excellent candidate for the procedure.

“Vivienne was determined to lose weight but was against having surgery to do it,” he says. “She’s a very busy physician who does lots of traveling, so she couldn’t afford the downtime for recovery that’s required with surgery. ESG is safe and effective, and also has a short, three-day recovery. It’s currently the most effective endoscopic method for weight loss, and it’s suitable for almost everyone.”

On May 22, 2017, Vivienne had the 75-minute procedure. By 2:00 that afternoon she was napping in her hotel room. Four days later, she was on a flight home and then back to work the next day.

“After the procedure, I felt like Dr. Kumbhari said I would — there was pain in my stomach area, and I felt a bit nauseated, but it was bearable,” recalls Vivienne.

Losing weight has even had an impact on Vivienne's 10-year hobby, pottery. "Now I have more space to play around with the clay."

Dunlap says Vivienne has learned a key to success: eat until the first sign of fullness and then stop.

“The procedure is a tool that helps you eat smaller portions,” explains Dunlap. “The minute you’re full, you don’t eat anymore because you’re satisfied. If you eat too much, you’re uncomfortable.”

Vivienne before the endoscopic sleeve gastroplasty procedure (left) and after the procedure (right).