Todd lost 80 pounds, changing his thinking and his life. 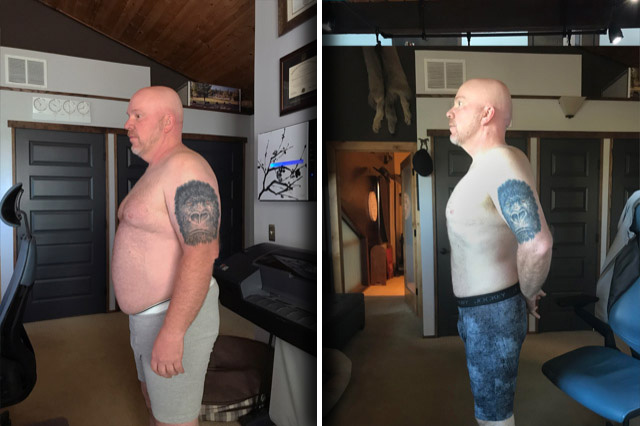 Todd Kane, 50, is no stranger to transformation. In 2015, he and his partner Nathan were ready for a change of scenery from their urban life in St. Louis. An internet search for “beautiful places to wake up in the United States,” led them to Bend, Oregon, where they bought a ranch they named Slice Ranch — their slice of heaven.

“I sold the Lexus and house and bought a cowboy hat and a ‘52 Chevy pickup,” says Todd.

Continuing to work remotely designing curriculum for higher education, they also started training and breaking horses and offering trail rides, sharing their homestead with a menagerie of horses, goats, chickens and dogs.

But it took another transformation two years later for Todd to feel like he truly had a new life. In August 2017, he underwent endoscopic sleeve gastroplasty (ESG) at Johns Hopkins, and over the next nine months he lost 83 pounds.

“I was fat; my weight had been a lifelong struggle,” admits Todd. “I’d tried every diet known to man over the years, losing and gaining hundreds of pounds.”

Todd says when he was in his 40s he accepted that he was “probably always going to be fat.” What he hadn’t counted on, however, were the health issues that started creeping in as a result of his weight and a hard recovery after falling off a horse. He was on medication for high cholesterol, reflux and high blood pressure. He had psoriasis and was developing arthritis and had undergone one knee replacement. A second bad knee and getting easily winded made it hard for him to get around.

“I had resigned myself that at 48, I didn’t have a long life ahead of me,” says Todd. “I spent a lot of time planning my departure and making sure Nathan would be taken care of.”

A phone call from a retired doctor friend was the start of turning that attitude around. He’d seen a story on the news about endoscopic sleeve gastroplasty and, knowing Todd’s struggle, urged Todd to learn more about the procedure.

ESG is a minimally invasive weight loss procedure that reduces the size of the stomach by 70 percent. The procedure limits the amount of food you can eat and the number of calories your body can absorb.

“ESG is very simple and safe — there are no incisions, nothing is cut out. Patients recover quickly with minimal disruption to their life.”

During the procedure, a gastroenterologist inserts an endoscope — a thin, flexible tube with a tiny camera and light — down the throat into the stomach. Using a suturing device attached to the endoscope, the surgeon places sutures in the stomach, making it smaller and tube-shaped. The procedure takes about 90 minutes and is done without needing to make an incision in the abdomen, thanks to the camera on the end of the endoscope. Most patients go home the same day.

Dunlap explained that Johns Hopkins’ ESG program is much more than just undergoing the procedure. For up to a year after the procedure, patients can count on support from a team of weight loss experts — a medical internist, nutritionist, exercise physiologist and a behavioral psychologist — to make lifestyle changes that help keep the weight off. Dunlap also keeps in touch with patients via email and phone.

According to Vivek Kumbhari, M.D., director of bariatric endoscopy, that contact and support is important to patients’ success.

“We know that the more contact a health provider has, the better the patients do,” he says.

“We cater to patients and communicate whatever way is easiest for them,” explains Kumbhari. “For out-of-town patients, that may be a phone call or a call over the internet. They have my number and can call me before or after the procedure when they have questions.”

Kumbhari reviewed Todd’s health history. Todd was concerned that his many health issues would make the procedure too risky. Kumbhari explained that there was a reduced risk of complications because ESG is a minimally invasive procedure. He also assured Todd that because his health problems were weight related, they would go away as he lost weight.

“ESG is very simple and safe — there are no incisions, nothing is cut out,” says Kumbhari. “Patients recover quickly with minimal disruption to their life. A patient like Todd can have the procedure on Friday, fly home Saturday and be back to work on Monday.”

Todd scheduled the procedure, but texted Kumbhari a few days before, confessing that he had cold feet. A phone call from the doctor, who was out of the country, calmed his nerves.

“He listened to my fears and addressed my questions,” says Todd. “He gave me the confidence that he had my back and was invested in the outcome,” says Todd.

Johns Hopkins staff helped Todd coordinate travel details, and when he arrived at the hospital, he immediately knew he had chosen the right facility and program.

“When I walked in the door, I knew I was going to be well cared for,” says Todd. “I felt like I had a team. Everyone from the person at the reception area, and then later in pre- and postop took care of me and my partner, Nathan, too.”

A Safe Jump-Start to Weight Loss and a New Life

As expected, Todd’s procedure took a little over an hour. He spent two hours in recovery, and then he was on his way back to the hotel. Flying home the next day, he says his stomach felt sore like he had been doing situps.

“Recovery was super easy,” says Todd. “I followed their plan to the letter.”

After the endoscopic sleeve gastroplasty, Todd followed a liquid diet for 10 days, transitioned to soft foods, and then regular food.

That meant a liquid diet for the first 10 days, transitioning to soft foods, then regular food, eating whatever he wanted throughout the day, in small portions. He met face-to-face over the internet with the Johns Hopkins team and connected with Dunlap at least once a month to stay on track.

“ESG gives patients like Todd, who was motivated and had clear-cut goals, the jumpstart they need. People lose an average of 50 pounds in six months. The weight loss is dramatic and fast, and the weight stays off,” he says.

As Todd lost weight, his knee problems improved. He started walking, then running with their goats around a track in one of their pastures, and after 20 years, riding a bike again. He dropped to a 34-inch waist and lost a full shoe size. He also got rid of more than weight — his psoriasis, high blood pressure and cholesterol, reflux and arthritis went away, too.

Todd says he now has control he’s never had before.

“When you’re fat you feel like you’re going down the road of life with no control. Now I feel like I have a gas pedal and a brake,” he says. I eat anything I want to eat, but I’m mindful of the space I have. I enjoy food so much better today without feeling deprived.”

Todd and his partner Nathan.

That newfound control gave Todd a newfound outlook on life. Three months after the procedure, he was able to get down on one knee and propose to Nathan on a trip to Italy.

“It’s been a life-changing event,” says Todd. “Before surgery, I felt like I was dying. Today I’m clearly living, with a bright future, thanks to Dr. Kumbhari.”