Morgan, a bubbly 8-year-old, suffered a severe inflammatory syndrome known as MIS-C after a mild bout of COVID-19. Coordinated care at Johns Hopkins Children’s Center saved her life and restored her spirit.

When 8-year-old Morgan Deitz developed a fever on Aug. 30, her mother, Lauren, took notice, but figured it couldn’t be COVID-19. Morgan had already had a mild case earlier that month after catching the coronavirus at camp, and her older sister Natalie had it, too. Morgan, for the most part, had bounced back to her outgoing, active self.

No one in her family would have guessed that days later Morgan would be in Johns Hopkins Children’s Center fighting for her life. The cause: multisystem inflammatory syndrome in children, or MIS-C, an uncommon but serious complication of COVID-19.

MIS-C: A Serious Syndrome in Some Kids Who Have Had COVID-19

When Morgan’s fever didn’t respond to acetaminophen, Lauren and her husband, Justin, grew increasingly concerned, and even more so when their daughter developed stomach pain. On Wednesday, Sept. 1, Morgan was worse, and had a rash on her hands. Lauren and Justin took her to Johns Hopkins Children’s Center’s emergency department.

Morgan received fluids, and tests revealed a rapid heart rate and unusually low blood pressure. While at the hospital, Lauren says her daughter developed red eyes and the skin on her lips cracked and split. A rash appeared on her feet, and her fever rose to 104 degrees. Morgan complained of being sore all over and could barely stay awake.

Considering Morgan’s symptoms and her recent history of having COVID-19, the doctors in the emergency department diagnosed her with MIS-C, or multisystem inflammatory syndrome in children, a potentially dangerous complication of infection with SARS-CoV-2, the coronavirus that causes COVID-19.

She was admitted and treated at the Children’s Center’s pediatric intensive care unit (PICU). 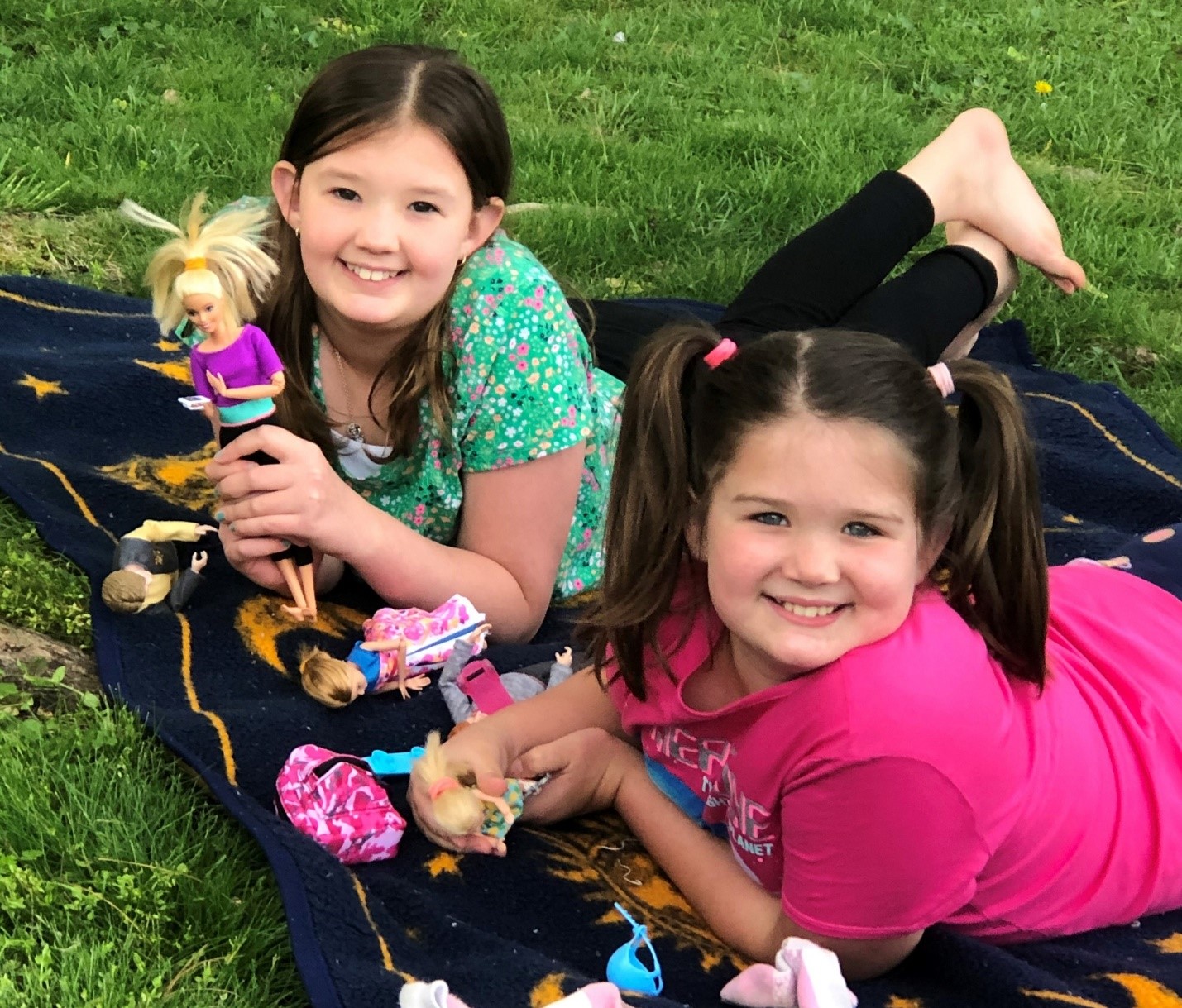 Morgan (on right) and her sister Natalie before Morgan’s hospitalization

MIS-C causes a surge of severe inflammation that can damage a child’s internal organs. Pediatric critical care specialist Meghan Bernier, M.D., who cared for Morgan, says, “We see more patients with MIS-C two to six weeks after a surge in COVID-19 cases. MIS-C is scary, but treating it with intravenous immunoglobulin (IVIG) and high doses of steroids can help calm down the immune system.”

By the next day, Morgan had already improved and was sitting up in bed, and her family was hoping to bring her home that weekend. Bernier says, “On Friday, Morgan looked fantastic. A lot of our MIS-C patients turn around quickly.” The signs showed that Morgan was turning the corner, and the team decreased her steroids.

But on Saturday, Lauren and Justin saw that Morgan’s face was deeply flushed: the way she had looked days earlier in the emergency department. Again, the child’s heart rate pushed upward while her blood pressure plunged. One of Morgan’s caregivers saw the change and immediately called for emergency intervention — a “code.”

As Lauren and Justin stood by in helpless terror, doctors and nurses rushed to their daughter’s bedside to push fluids and provide breathing support and other rescue measures.

Lauren says, “Time just stood still. It was such a close call, so gut-wrenching — seeing the resident press the blue code button and the room filling with people and tons of equipment and tears running down Morgan’s little cheeks.

“I think the hardest moment for us was after she was stabilized: Justin and I wondered what would have happened if we had taken her home? We might have lost her.”

Morgan went back to the PICU. Her doctors wondered if Morgan was having an allergic reaction. As it turned out, Morgan wasn’t allergic to her medication: She needed more of it. The pediatric rheumatologist on the team, Julia Shalen, M.D., determined the dosage of steroids Morgan had received needed to be even stronger to keep her immune system from attacking her.

The increased dose worked and stopped that crisis, but three days later, it happened again: Morgan’s face flushed, her heartbeat increased, and her blood pressure began to sink. But, Lauren says, the team knew what to do. “Tuesday’s crash wasn’t as bad. Everyone was more prepared. We knew what the steps were.”

Lauren and Justin: Part of the Care Team

Lauren says she and Justin appreciate Morgan’s doctors and nurses listening to them when they sensed something was wrong.

“Before she’d drop in blood pressure, we’d see the red cheeks, and our observations were reported during the doctors’ rounds. When it happened the second time, on Tuesday, we pointed it out. They quickly saw and agreed, and enacted the care plan.

“Getting information from doctors can be intimidating if they’re using big words, acronyms and technical terms. But Morgan’s doctors used clear language and respected how involved we were.

“They are brilliant specialists in their fields,” Lauren says, “and they respected our expertise in knowing Morgan.”

As Morgan started doing better, Lauren says visits from family members helped Morgan’s spirits. But she had been through so much, and was tired of the hospital, the IV needles and being away from her family and friends.

“She was especially disappointed that she was missing her first day at school, which she loves,” says Lauren. “Morgan is quite a social butterfly, and is happiest around other people.”

To address the psychosocial impact of Morgan’s severe illness, the team called upon the Children’s Center’s Child Life group. Kelley Ercole, M.S., CCLS, who specializes in working with patients on the pediatric clinical research and cardiac unit, took Morgan’s case.

Ercole says she engaged Morgan in a therapeutic art activity to allow her to process her worries and fears in a developmentally appropriate way. During this activity, Morgan drew or wrote on a blank canvas, working through the toughest parts of her experience: the needles, the lack of sleep and missing school. Ercole worked with Morgan to identify the things that helped, such as family visits, play activities and treats from Child Life’s prize box.

“This activity overall gave Morgan a safe space to process her emotions, have an outlet of expression, and a sense of control in an environment that lacked so much control for her,” Ercole says. She adds that other play activities she involved Morgan in helped make the hospital environment less frightening.

Lauren says, “The doctors saved Morgan’s life, but Kelley and Child Life brought her spirit back.” 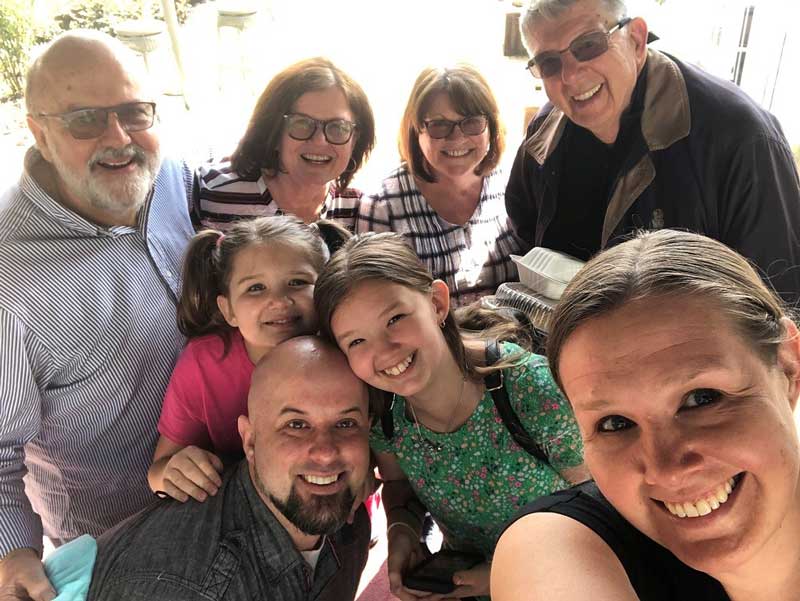 Morgan (center, in pink) surrounded by her loving family, before her illness and recovery.

A Turn for the Better After Severe MIS-C

Two weeks after Morgan’s first symptoms, Lauren says, the family felt more hopeful. “Morgan was really feeling well and up and walking,” Lauren says, “It was like, ‘Oh my gosh; our daughter’s back. Finally, here’s Morgan after two weeks.’”

Friday, Sept. 10, Morgan went home. Lauren says her daughter was a little sad to leave the Children’s Center. “She loved walking around the hospital with Kelley, playing bingo and Disney trivia, meeting people and being treated like a celebrity. The Child Life department helped her so much emotionally. Now when she talks about the hospital, she says it wasn’t so bad.”

But home brought Morgan back to what she loves the most: her older sister, Natalie. The two girls, who share a love of dolls, making bead bracelets and hanging out together, were finally reunited.

Morgan went back to school a few days later. She is still on limited activities and follows up with Allen Everett, M.D., her pediatric cardiologist, who says, “Morgan has made a fantastic recovery, and is thriving at home.” (Everett notes that his colleagues at the Children’s Center’s Blalock-Taussig-Thomas Pediatric and Congenital Heart Center have received a research grant from NIH to develop predictive models of MIS-C.)

Morgan undergoes regular blood tests to measure signs of inflammation (c-reactive protein) and a peptide that indicates heart damage, but so far, her bloodwork has shown no cause for concern. Rheumatologist Julia Shalen says Morgan was cautiously weaned off steroids, and is following up with gastroenterology doctors at Johns Hopkins. (Morgan experienced some GI symptoms before the onset of MIS-C, which might have had something to do with the severity of her immune reaction.)

Meanwhile, Morgan is recovering. Lauren says, “Morgan’s doing wonderfully. Her energy is returning for now, and she got to play her first game of rec league soccer. She hated sitting things out. She’s a spunky little kid, so bubbly and happy-go-lucky.”

Morgan (on left), recovering from MIS-C and ready to return to school with her sister.

MIS-C: One Reason COVID-19 Can Be Serious in Children

“Morgan is a healthy kid who got COVID and then got a bad complication of that,” says Shalen. “It speaks to the importance of community efforts to protect our unvaccinated population against COVID. This family did everything they should be doing, but at the time, vaccines were not yet available for their 8-year-old child.”

Lauren says her experience left her with strong feelings about coronavirus precautions and those who don’t take COVID-19 seriously.

“COVID does affect children,” she says. “I was so hurt when I saw on social media that parents were wanting to unmask kids. COVID was like a cold for Morgan at first, but then look what it did. No one thinks it could happen to their child, but this coronavirus can be different in each child. I’m still trying to process this and learn.”

Shalen says, “The American College of Rheumatology’s MIS-C task force has already revised its recommendations for treating MIS-C twice, and more research comparing therapies is emerging. We are incorporating new knowledge as it’s available and figuring out the treatment that’s best for each kid.

“Taking care of kids with MIS-C is such a collaborative effort. It speaks to the strength of these large pediatric departments where people are able to work together and adapt, understand that things are coming and have the foresight to respond, since we’ve dealt with this before.”

Director of the Pediatric Proteome Center
Professor of Pediatrics

COVID-19 in Babies and Children: Symptoms and Prevention

As more becomes known about the coronavirus, here is what parents and guardians need to know about it and COVID-19 in babies and children, with insights from Aaron Milstone, M.D., M.H.S., a pediatrician at Johns Hopkins Children’s Center and an infectious disease expert at The Johns Hopkins Hospital.

Learn more about COVID-19 in babies and children.

MIS-C and COVID-19: Rare Inflammatory Syndrome in Kids and Teens

Multisystem inflammatory syndrome in children (MIS-C) is an illness that can occur after COVID-19 infection and affects mostly school-age children. While the syndrome is rare, it can be dangerous.

Learn more about MIS-C and COVID-19

Child Life specialists work in the inpatient and outpatient settings to enhance the emotional and social well-being of your child and family throughout your health care experience.