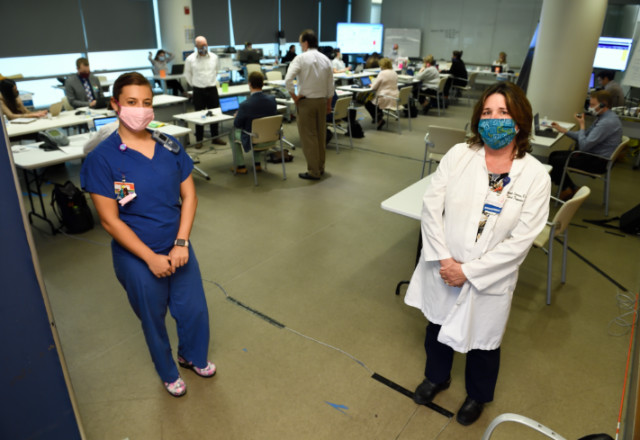 Nicole Troiani (left) and Deborah Sherman, shown here in the Unified Command Center at The Johns Hopkins Hospital, lead an effort by nursing to place intubated patients with COVID-19 on their stomachs to try to increase the amount of oxygen to the bottom and back parts of the lungs.

As the number of patients with COVID-19 began to rise at The Johns Hopkins Hospital in March, medical intensive care unit (MICU) nurse Nicole Troiani found herself busier than ever — and not just caring for critically ill patients in her own unit.

With additional hospital units transformed to care for patients with COVID-19, and as placing patients on their stomachs during treatment became more widespread and evidence grew that the practice could help, the MICU charge and resource nurses were increasingly getting called to help educate units on how best to turn over and monitor patients on ventilators.

“We have very experienced ICU nurses who had never had to do this,” says Troiani. So she began developing resources, like step by step written instructions on how to move patients, as well as a video demonstration.

‘Proning’ to Relieve Pressure on the Lungs in Coronavirus

Many hospitals are placing patients with COVID-19 on their stomachs as a method to try to increase the amount of oxygen to the bottom and back portions of the lungs. Called prone positioning, or proning, the technique relieves some of the pressure caused by gravity, the heart and diaphragm when lying on the back, and it can help clear respiratory secretions. Proning has long been used in the MICU for serious lung conditions like acute respiratory distress syndrome (ARDS), Troiani says. Normally, patients who need to be proned are transferred to the MICU, but with so many patients being treated, that wasn’t always an option.

Around the same time, nurse Deborah Sherman, program director for clinical informatics and deputy operations chief in The Johns Hopkins Hospital’s emergency management command, was in a meeting with hospital leadership discussing a large number of patients with COVID-19 who had been admitted overnight to a unit that typically cares for intermediate-level patients. All needed to be intubated and cared for in the prone position. Sherman immediately thought to create a prone team, like a code team that goes to units to help manage patients in crisis. Hospital President Redonda Miller loved the idea — and asked Sherman to get it in place quickly.

Proning three to four times made a big difference for one male patient who was intubated and heavily sedated for over a month.

“We all did not think he was going to make it. Proning and the care that he got really is what helped him survive. He was discharged from the hospital and is … doing really well,” says MICU nurse Nicole Troiani.

Sherman contacted the MICU and partnered with Troiani, as well as nursing managers and the Department of Physical Medicine and Rehabilitation. Within a couple of days, she had assembled a three-person prone team: two outpatient physical therapists and a MICU resource nurse. Because the physical therapists usually handle patients who are less ill, Troiani conducted training in the hospital’s simulation center, using mannequins. While the prone team members have regular duties, when they are paged to help prone a patient, they spring into action. The team has been called an average of eight to 10 times each shift, Sherman says.

Nurses from The Johns Hopkins Hospital show how to properly prone an intubated patient.

The biggest concern in moving patients who have COVID-19 is protecting their airways, Troiani explains, so a respiratory therapist has to be present. “It’s a very methodical process,” she says, “a lot of 1-2-3 counting to make sure everybody knows which moves are being made, and we have the correct hold on the feeding tube and any IV tubing, so devices and tubes don’t get dislodged.”

Once the patient is in the prone position, where they typically remain for 16–24 hours per day, a chief issue is preventing pressure injuries to the skin from remaining in one position, Troiani says. Lindsay Rice, a wound care nurse, added in tips to the protocol on how to prevent such injuries, and produced a video demonstrating how to use a foldable pillow to protect the face — one of the most sensitive areas — where injuries can delay recovery.

While there aren’t yet outcomes to track the prone team’s success, Troiani says proning three to four times made a big difference for one male patient who was intubated and heavily sedated for over a month.

“He was discharged from the hospital and is doing squats and doing really well,” she says. “We all did not think he was going to make it. Proning and the care that he got really is what helped him survive.”

The prone team has been well received by units caring for patients with COVID-19, and it has helped ease staff members’ concerns about performing the procedure, Troiani says. There have been no issues with airway malfunctions or displaced tubing during proning since the team was established.

“People like the service,” adds Sherman. “It helps, and we’ve been able to educate all of the different units in becoming more comfortable with the process of proning. If we get a surge of patients with COVID-19, it won’t be as anxiety-producing.”

Sherman also has created a document about how to assemble a prone team. The material can be used by other hospitals in the Johns Hopkins Health System and beyond.