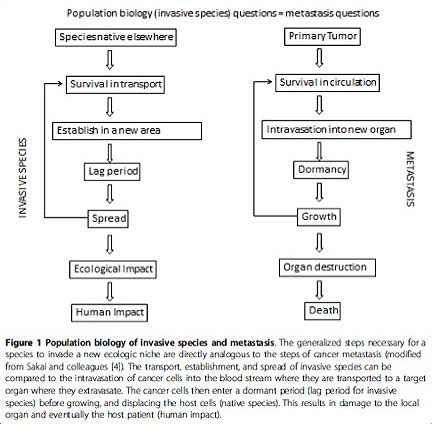 Ecologists have studied the population biology of invasive species for decades and have documented their impact on local environments as well as on the global ecosystem. The life cycle of invasive species is directly analogous to the study of cancer metastasis, as illustrated and explained below.

The Life Cycle of Invasive Species in the Environment

Invasive species start as a native population within a defined community and are then transported by some means to a new environment. In this new environment, the invader either then dies off or enters a period during which it establishes itself (lag period). It then begins to spread and have impact on the local environment, disrupting the ecosystem.

This disruption has broad implications for the native species and the broader ecosystem. Biologic traits that result in a robust invasive species include rapid proliferative capacity, adaptation to environmental stress (phenotypic plasticity) and high tolerance to environmental heterogeneity.

Cancer as an Invasive Species

Cancer metastasis follows a comparable life cycle. Cancer must grow in a primary site, extravasate, and survive in the circulation to then intravasate at a target organ (invasive species survival in transport). Cancer cells often lay dormant at their metastatic site for a long period of time (lag period) before proliferating (invasive spread).

A large proportion of solid tumor metastases are bone metastases, known to usurp hematopoietic stem cell (HSC) homing pathways to establish footholds in the bone marrow. Evidence from the Pienta lab and others suggests that tumor cells target and parasitize the HSC niche during metastasis just as invasive species do in the environment. Successful metastatic cancer cells grow in a primary site, emigrate out from that site, survive during migration, immigrate into the new environment and then naturalize and overtake/co-opt and/or cooperate with the host species to form a new tumor ecosystem. 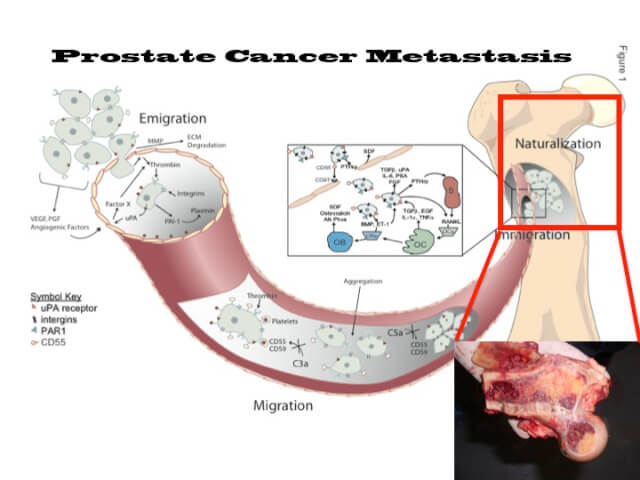