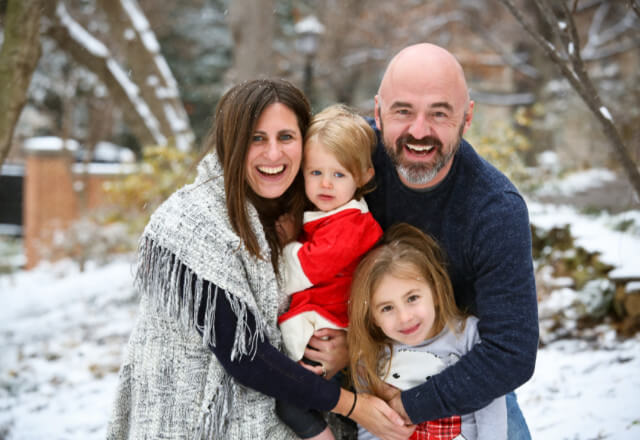 A biking enthusiast educated himself on the warning signs of testicular cancer.

Nicolas Taborga says he was well aware of testicular cancer long before he was diagnosed. A loan officer for a commercial bank in Washington, D.C., Nicolas had always been physically active and in good health. He previously lived in the San Francisco area, where he competed in triathlons and followed the career of former cyclist Lance Armstrong. Nicolas also had read Armstrong’s book, chronicling the athlete’s recovery from testicular cancer.

“The best thing (Armstrong) ever said was to become your own advocate and really educate yourself, because an educated patient can better understand what the doctor is doing and be their own health advocate,” says Nicolas, age 50. “That was always in the back of my mind.”

When Nicolas was in his mid-40s, he and his wife decided to schedule general checkups for themselves. It was only as the doctor was leaving the exam room that Nicolas asked about some symptoms he was having. Since his cycling days, he had some shrinking in one testicle. Now he also was experiencing a feeling of heaviness in the testicles.

A Diagnosis of Testicular Cancer

The doctor checked him more thoroughly, suggested he have an ultrasound imaging test and recommended he see a urologist soon. He first saw a friend who was a urologist, who ordered blood work and confirmed that Nicolas had testicular cancer.

“It wasn’t a shock for me, I guess because I was educated,” Nicolas says. “As a layman, I did the best I could in understanding it and also knew the cure rate.”

Hopes of a Second Child

Nicolas and his wife started visiting a fertility clinic in hopes of having a second child. They also chose to get a second opinion at Johns Hopkins, where they met Phillip Pierorazio, M.D., director of the Division of Testis Cancer at the Brady Urological Institute in the Department of Urology. “Dr. Pierorazio made my wife and me feel at ease immediately,” Nicolas says. Before the Taborgas even left the room, they decided they were going to come to Johns Hopkins for care. Pierorazio scheduled surgery to remove both of Nicolas’ testicles, allowed time for him to bank additional sperm samples at the fertility clinic and planned to extract sperm at the time of his cancer operation.

I tell everybody when we first meet that everything that you wanted to do the day before you were diagnosed with testicular cancer, we want you to do after.”

In March 2014, Pierorazio performed surgery to remove both of Nicolas’ testicles and harvest any good sperm in the noncancerous portions. Fortunately, the cancer turned out to be a very early stage 1A, meaning it had not spread beyond the testicles and was at low risk for recurrence. Therefore, Nicolas did not need chemotherapy or radiation after surgery.

Nicolas has enjoyed good health since that time. He receives testosterone therapy at a local clinic and is physically active again, coming back to Johns Hopkins once a year for follow-up checks. In fall 2015, the Taborgas welcomed a second daughter — conceived with sperm harvested before and during Nicolas’ surgery.

He now encourages other men to pursue medical care for any similar concerns. “Have it checked out,” he says. “The best thing that could come back is it’s not cancerous.”

The disease frequently is diagnosed in young men. “Not only do we have a high cure rate, but we have a long life expectancy,” Pierorazio says. “I tell everybody when we first meet that everything that you wanted to do the day before you were diagnosed with testicular cancer, we want you to do after.”

The most common symptom of testicular cancer is a painless mass or lump in one or both testicles, Pierorazio says. Ninety percent of masses in the testicle are cancerous, while 95% of masses in the scrotum are noncancerous.

“It’s not up to you to figure that out, so come see a doctor — that’s our job,” Pierorazio says. If a physical exam finds something abnormal, the doctor will recommend an ultrasound, which is painless and inexpensive, he says. “The vast majority of the time, it finds things that are completely benign (noncancerous), and it reassures people. The worst thing is putting your head in the sand and not being aware.”

Risk factors for testicular cancer include having an undescended testicle and a personal or family history of the cancer. “The average time in the United States for a man to feel something and come to the doctor is about four to six months, and the cure rate is still 95%,” Pierorazio says. “If we could get over the stigma, raise awareness and get people to the doctor sooner, a lot of us feel we could improve those numbers and reduce the need for more aggressive therapies like chemotherapy, radiation therapy or subsequent surgeries.”

Learn about testicular cancer, one of the most common cancers in young men.

Learn more
back to top button