Could Some Intermediate-Risk Men Do Active Surveillance?

“This is a four- to five-times higher risk than for men with low- and very low-risk prostate cancer.” 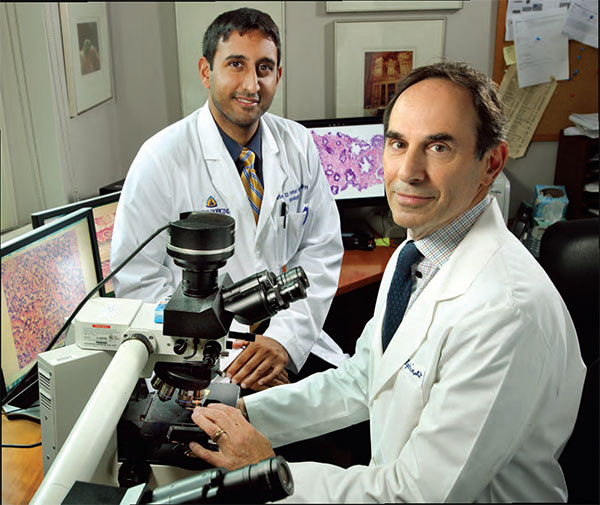 Patel and Epstein: 25 percent of men diagnosed with low-volume, Gleason 3 + 4 disease on biopsy turn out to have “adverse surgical pathology.”

More than a decade ago, Jonathan Epstein, M.D., the Rose-Lee and Keith Reinhard Professor in Urologic Pathology and Director of Surgical Pathology, reported that Gleason 7 cancer behaves differently depending on whether there is more Gleason 3 or more Gleason 4; now, pathologists have two Gleason 7 categories: Gleason 3 + 4, and 4 + 3.

But it’s not that straightforward. As Epstein has also found for many years, when men undergo prostatectomy and a pathologist looks at the entire prostate specimen, some men are found to have a higher stage of cancer, and are “upgraded.” A few men are actually found to have more low-grade cancer and are downgraded.

This brings us to AS. “Some experts have questioned whether there is a subset of men with Gleason 3 + 4 = 7 cancer with favorable characteristics, who have a minimum risk of adverse pathology at surgery, who could also have been candidates for active surveillance,” says Brady resident Hiten Patel, M.D., M.P.H. With colleagues Jeffrey Tosoian, M.D., M.P.H., Ballentine Carter, M.D., and Epstein, Patel recently investigated this issue.

In a large cohort study, they found that 25 percent of men diagnosed with low- volume, Gleason 3 + 4 disease on biopsy, turned out to have “adverse surgical pathology,” says Patel. “This is a four- to five-times higher risk than for men with low- and very low-risk prostate cancer.”

Because of this significant risk, Epstein says, “these findings do not support the presence of a ‘favorable’ subgroup of Gleason 3 + 4 disease” at this time. He adds that some newer factors, including the percent of pattern 4 and the histology of the pattern 4, along with MRI findings and new molecular tests may one day identify a favorable subset of Gleason 3 + 4 men – men who could safely go on AS.

But for now, Epstein adds, “men with Gleason 3+4=7 prostate cancer who are otherwise eligible for curative intervention (surgery or radiation) should be fully informed as to the avoidable risk associated with use of AS.” Their findings were published in JAMA Oncology.