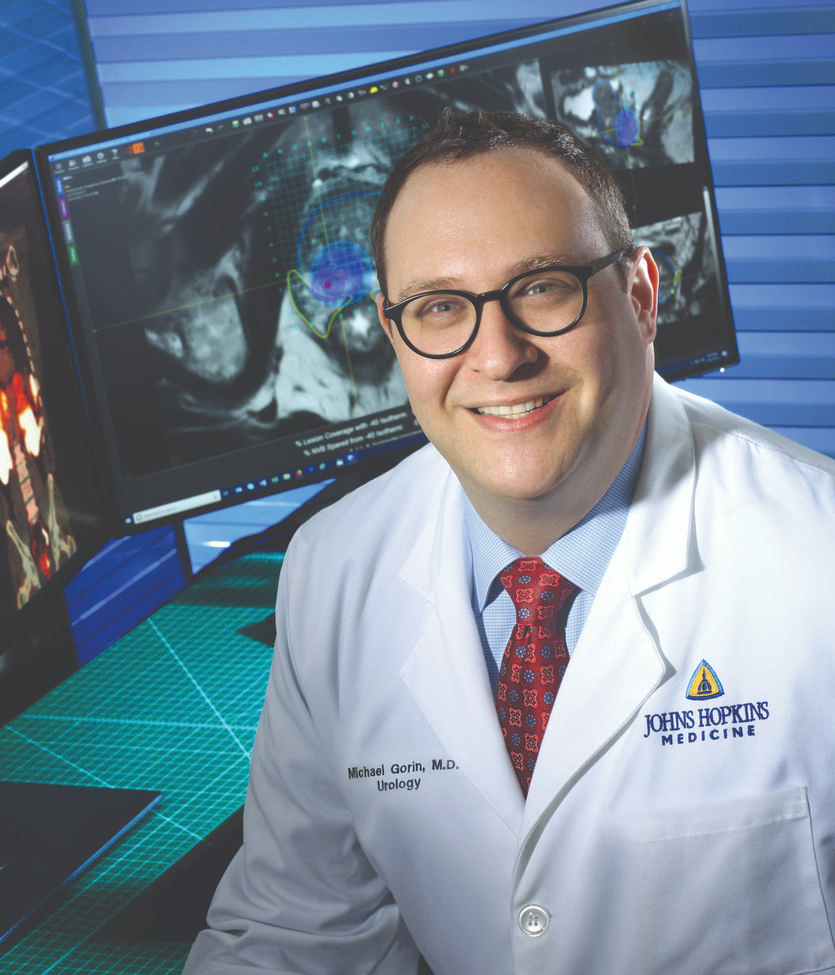 Gorin is succeeding the great Brady urologist, H. Ballentine Carter, M.D., as Director of the Brady’s Prostate Cancer Program. Like Carter, Gorin is committed to an individualized treatment approach for every man with prostate cancer who comes to the Brady. This is possible thanks to new innovations in prostate imaging and biopsy.

Discovery recently interviewed Gorin about his vision for the Prostate Cancer Program. Here’s some of what he had to say:

“We are continuing the work of Bal Carter, who showed that most men with low-grade prostate cancer do not require immediate treatment, and instead can be monitored safely with active surveillance. The next step is in understanding how we can safely minimize the number of blood tests and prostate biopsies that are required for men on surveillance.” Gorin believes this is possible “because most men on active surveillance who go on to require treatment likely had higher-grade cancer all along; it simply evaded detection on previous biopsies.” He feels “that we can decrease the intensity of active surveillance if we do a better job detecting significant cancers at the time of initial diagnosis.

The key to Gorin’s goal begins with advanced imaging; particularly, multi-parametric MRI, or mpMRI (a form of MRI that looks at the prostate in several ways, including with a contrast dye injected in the blood). This sophisticated form of MRI shows suspicious areas of the prostate that can be targeted for biopsy. “With the use of MRI-targeted biopsy, the likelihood of identifying clinically significant prostate cancer increases substantially.” Gorin has made it a priority to ensure that all men in the active surveillance program are routinely imaged with MRI and, then when appropriate, given a targeted biopsy.

But Gorin wants to revolutionize biopsy, as well, by avoiding the rectum – instead reaching the prostate through the perineum, an area of skin located between the scrotum and rectum.

“With the traditional transrectal biopsy, potentially dangerous bacteria can be transmitted from the rectum to the blood stream,” Gorin explains. “This is very concerning for men on active surveillance, who typically require multiple biopsies. With the transperineal approach, instead of passing through the rectum, the needles go through an area of skin, which can be thoroughly cleansed before the procedure. We used to routinely swab a man’s rectum to see what bacteria he had, and we would give him antibiotics based on those bacteria. Despite our best intentions, sometimes these antibiotics would fail to prevent an infection. Additionally antibiotics can cause complications on their own. With the transperineal approach, we don’t have to give any antibiotics.”

In the Brady’s Active Surveillance Program for prostate cancer, “at least 90 percent of men are getting a transperineal biopsy. It’s safer and is quickly becoming the new standard of care throughout the world. With our novel biopsy techniques and imaging strategies, we can ensure the lowest possible risk of side effects to men on active surveillance.”

Gorin and colleagues, including his longtime mentor and Vice Chairman at the Brady, Mohamad Allaf, M.D., have developed a technique to perform MRI-guided prostate biopsy through the transperineal approach. “It’s not only cleaner, there’s reason to believe the transperineal approach is more accurate,” better able to sample the prostate’s anterior region – the area where cancer commonly develops in African American men.

Prostate MRI and transperineal biopsy are not just for men on active surveillance: “The vast majority of new patients presenting with an elevated PSA level now undergo an MRI-guided transperineal prostate biopsy.” But Gorin envisions taking this to the next level. “In an ongoing clinical trial funded through The Patrick C. Walsh Prostate Cancer Research Fund, we are investigating whether PSMA- targeted PET imaging plus mpMRI can improve the diagnosis of clinically significant prostate cancer.” PSMA (short for prostate-specific membrane antigen) is a molecule that sits on the surface of prostate cancer cells.

Hopkins radiologist Martin Pomper, M.D., Ph.D., has engineered a number of radioactive compounds that target PSMA and can be used for PET imaging. One of these agents, called 18F-DCFPyL, has been studied extensively by Gorin and coworkers at the Brady and is poised for approval in the U.S.

Can prostate cancer treatment be minimized even further?

Yes. The innovations in imaging are allowing something that has never been considered safe or feasible before: focal ablation of the prostate.

For men with a very small amount of intermediate- or high-risk prostate cancer, “instead of treating the entire prostate, we can treat just the portion of the gland that has the cancer – greatly minimizing the potential side effects of incontinence and erectile dysfunction that are seen with radical prostatectomy and radiation.” To make this possible, Gorin has brought to the Brady sophisticated equipment that allows the user to record the exact location of cancerous areas found on an MRI- or PET- targeted biopsy, a concept known as prostate cartography. “Because we know exactly where our biopsy needles went, we can now return to areas that were positive for cancer and deliver focal treatments.”

Gorin has begun performing focal cryoablation (controlled freezing of the prostate) in highly selected men using a technique he has developed, called “preoperative thermal dosimetry.” With special software that he created with an industry partner, cryoablation procedures can be planned with precision – similar to the way radiation oncologists determine where to deliver radiation, and how much the dose should be.

Because this is still a very new concept, Gorin is “rigorously studying prostate ablation.” One avenue for study is through a collaboration started at the FDA, known as the SPARED registry. “SPARED is a multi-center effort to evaluate the outcomes of various forms of focal therapy that are being performed throughout the country,” he says. “The FDA remains concerned about the many unknowns of ablative therapy for prostate cancer, and has provided resources to allow urologists to study the safety and efficacy of this emerging form of prostate cancer treatment.” The SPARED registry is currently housed at the Brady, and Gorin is the coordinating principal investigator for this multi-center study.

But what about the multi-focal nature of prostate cancer?

Hopkins scientists previously have shown that the majority of men with prostate cancer will develop tumors in multiple, distinct areas of the gland. However, Gorin says, “just because it’s multifocal doesn’t necessarily mean you have to treat all the areas. Perhaps just treating certain areas, like those you can see on MRI or those that have a certain molecular signature, is sufficient, especially for older men who need a less durable solution for their prostate cancer.” Also, he notes, “there are some men who truly have only one or two small areas of cancer—something that can now be more readily determined using advanced imaging and biopsy techniques—and ablation may serve as the preferred treatment option for these men, regardless of age.”

Because this is all so new in concept, Gorin notes, “we are proceeding very cautiously. All men who are undergoing focal treatment are enrolled in the SPARED registry and are required to adhere to strict follow-up surveillance,” including a prostate MRI at two to three weeks after ablation, routine PSA testing, and a repeat MRI-guided prostate biopsy within a year of treatment. “We cannot be too cautious, but we also must push boundaries if – like my mentors, Patrick Walsh and Bal Carter – we are to continue to improve the care of men with prostate cancer.”

The H. Ballentine Carter, M.D., Prostate Research and Innovation Fund
“We know a lot, but certainly there is more to learn, about the markers, the disease itself, and how to deal with it when something should be done.”