Baltimore is a spirited city – a unique blend of historic charm, ethnic heritage and urban vitality. In the midst of a sweeping renaissance that has brought a lively, cosmopolitan atmosphere, Baltimore has retained the distinctive flavor of its past as a port city on the Chesapeake Bay. 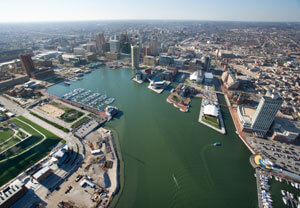 The National Aquarium is located in Baltimore's Inner Harbor.

The nationally acclaimed Inner Harbor is the centerpiece of Baltimore City's renaissance. Surrounded by such landmarks as the National Aquarium, the Maryland Science Center, and the Baltimore Maritime Museum, the Inner Harbor is a waterfront showcase featuring shops, restaurants, harbor cruises and a variety of activities year-round.

Fort McHenry, birthplace of "The Star Spangled Banner", offers a glimpse of Baltimore's past, as does the B&O Museum which celebrates the inception of the railroad. Visits to the homes of Edgar Allan Poe, Babe Ruth and H.L. Mencken provide a look into the lives of some of Baltimore's most famous citizens. The Carroll Mansion was the winter home of the last living and only Catholic signer of the Declaration of Independence, Charles Carroll.

The Baltimore Symphony Orchestra (BSO) is considered to be among the preeminent orchestras in the world.

Baltimore's Cultural scene is as diverse and lively as the city itself. The Meyerhoff Symphony Hall is home of the Baltimore Symphony Orchestra. The elegant Lyric Opera House, the Peabody Conservatory of Music and the outdoor stages of Pier 6 and Oregon Ridge play host to every musical taste from classical and jazz to country music and rock. Theater-goers will find the bright lights of Broadway at the Morris Mechanic Theater. Center Stage, the city's outstanding repertory company, as well as Theatre Project, Arena Players and numerous dinner theaters offer a wide variety of entertaining productions from classic and contemporary to modern dance and experimental performance works.

For lovers of the visual arts, the renowned Cone Collection of the early 20th-century works by Matisse and Picasso is housed at the Baltimore Museum of Art. The Walters Art Gallery holds a magnificent collection of Oriental, Egyptian and European art and artifacts. Exhibitions at the Maryland Institute College of Art and numerous private galleries around town make for a lively contemporary art scene. Visit the Peale Museum, the oldest museum in the United States.

Sports fans can enjoy Orioles baseball at Camden Yards. The Baltimore Ravens play right down the street from the Orioles at M&T Bank Stadium. The Preakness, second jewel in the Triple Crown of horse-racing, is run each year at Pimlico Race Course. First Mariner Arena is home to the Baltimore Mariners (indoor football), the Baltimore Blast (indoor soccer), and the venue for several concerts and other events.