June 3, 2010- A Johns Hopkins and Japanese research team has generated the first comprehensive genetic “parts” list of a mouse hypothalamus, an enigmatic region of the brain — roughly cherry-sized, in humans — that controls hunger, thirst, fatigue, body temperature, wake-sleep cycles and links the central nervous system to control of hormone levels.

Flaws in hypothalamus development may underlie both inborn and acquired metabolic balance problems that can lead to obesity, diabetes, mood disorders and high blood pressure, according to a report on the study published May 2 in the advance online publication ofNature Neuroscience.

“Knowing how cells develop in this part of the brain will help us understand how they regulate behavior, mood and metabolism,” says Seth Blackshaw, Ph.D., an assistant professor in the Solomon H. Snyder Department of Neuroscience, Johns Hopkins University School of Medicine.

The hypothalamus is one of the most diverse and complex parts of the brain, and having an index of the genes involved in producing its many cell types is a toolbox that researchers can use to manipulate the activity of brain cells by turning them on and off, or tracing their connections. This may ultimately lead to better diagnostic and treatment options for a variety of disorders.

“The study of hypothalamic development, particularly of cell specification, will help us to understand how hypothalamic neurons function to regulate behavior and physiology,” says Blackshaw. “Because of when and where we saw certain genes turn on, we now have identified a set of candidate players that guide the assembly of the different parts of the hypothalamus and that specify the many individual cell types within it.” 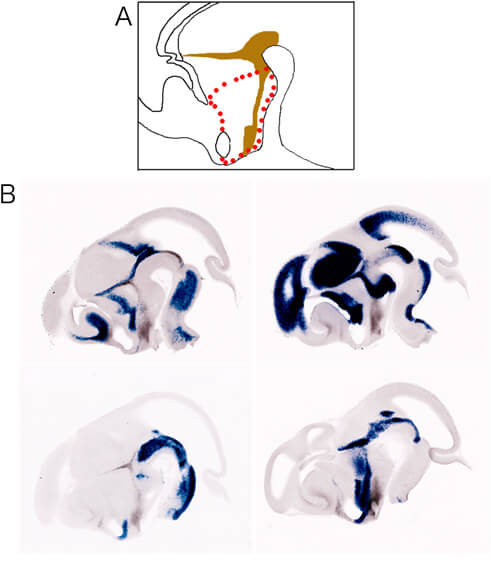 The hypothalamus is composed of at least dozens of types of neurons — and more likely hundreds — each of which corresponds to a gene that has remained unidentified until now. Its cellular arrangement is more akin to a bowl of spaghetti than a neatly organized club sandwich, according to Blackshaw. The catalog of molecular markers identified here helps unravel this complexity.

The team’s first challenge was to dissect away, at the very start of neural development, the part of the mouse brain which develops into the hypothalamus, and then cut tiny slices of this region for use in microarray analysis, a technology that reveals multiple gene activity. By analyzing all the roughly 20,000 genes in the mouse genome, the team identified 1200 as strongly activated in developing hypothalamus and characterized the cells within the hypothalamus in which they were activated. The team then characterized the expression of the most interesting 350 genes in detail using another gene called Shh, for sonic hedgehog, as a landmark to identify the precise region of the hypothalamus in which these genes were turned on. This involved processing close to 20,000 tissue sections — painstakingly sliced at one-fiftieth of a millimeter thickness and then individually examined.

“We were able to use this data to find genes whose expression matched every individual hypothalamic nucleus and essentially assemble a jigsaw puzzle of gene expression patterns that completely covered the developing hypothalamus,” Blackshaw says.  “Now that we have a complete set of molecular landmarks, along with an extensive molecular parts list, we can begin to learn how all these parts fit together to create this essential and highly complex brain region.”

This research was supported by March of Dimes, the Klingenstein Fund, the W.M. Keck Foundation, and the Japan Society for Promotion of Science.