October 22, 2009, Deep in the ear, 95 percent of the cells that shuttle sound to the brain are big, boisterous neurons that, to date, have explained most of what scientists know about how hearing works. Whether a rare, whisper-small second set of cells also carry signals from the inner ear to the brain and have a real role in processing sound has been a matter of debate. 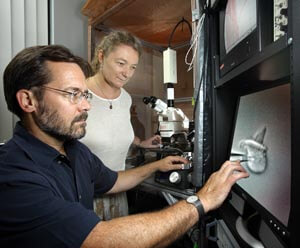 Now, reporting on rat experiments in the October 22 issue of Nature, a Johns Hopkins team says it has for what is believed to be the first time managed to measure and record the elusive electrical activity of the Type II neurons in the snail-shell-like structure called the cochlea. And it turns out the cells do indeed carry signals from the ear to the brain, and the sounds they likely respond to would need to be loud, such as sirens or alarms that might be even be described as painful or traumatic.

The researchers say they’ve also discovered that these sensory cells get the job done by responding to glutamate released from sensory hair cells of the inner ear. Glutamate is a workhorse neurotransmitter throughout the nervous system and it excites the cochlear neurons to carry acoustic information to the brain.

“No one thought recording them was even possible,” says Paul A. Fuchs, Ph.D., the John E. Bordley Professor of Otolaryngology–Head and Neck Surgery and co-director of the Center for Sensory Biology in the Johns Hopkins University School of Medicine, and a co-author of the report. “We knew the Type II neurons were there and now at last we know something about what they do and how they do it.” 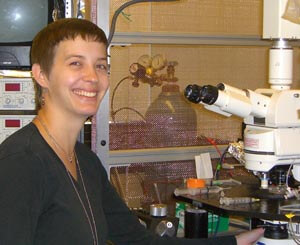 Results showed that, unlike Type I neurons which are electrically activated by the quietest sounds we hear, and which saturate as sounds get louder, each Type II neuron would need to be hit hard by a very loud sound to produce excitation, Fuchs says.

The cell bodies of both Type I and Type II neurons sprout long filaments, or axons that head to the brain, and some others that connect to sensory hair cells. Unlike the big Type I neurons, each of which make one little sprout that touches one sensory hair cell in one spot, the Type II cells have projections that contact dozens of hair cells over a relatively great distance.

A Type II neuron in the inner ear is revealed by fluorescent dye.  Credit: Catherine Weisz

“Somewhat counter-intuitively, the Type II cell that contacts many hair cells receives surprisingly little synaptic input,” Fuchs says. “In fact, all of its many contacts put together yield less input than that provided by the one single hair cell touching a Type I neuron.”

Fuchs and his team postulate that the two systems may serve different functional roles.  “There’s a distinct difference between analyzing sound to extract meaning — Is that a cat meowing, a baby crying or a man singing? — versus the startle reflex triggered by a thunderclap or other sudden loud sound.”  Type II afferents may play a role in such reflexive withdrawals from potential trauma.”

This study was supported by the National Institute on Deafness and Other Communication Disorders, and a grant from the Blaustein Pain Foundation of Johns Hopkins.

Authors on the paper are Fuchs, Weisz and Elisabeth Glowatzki, all of the Center for Hearing and Balance and the Center for Sensory Biology, Johns Hopkins University School of Medicine.