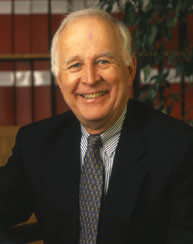 Rhoda Sarnat, a licensed clinical social worker, and Bernard Sarnat, a plastic and reconstructive surgeon, establish the award in 1992 because of a deep concern regarding the destructive effects of mental illness.

This year's award cited McHugh for his lifetime contributions to psychiatric scholarship and clinical care. The author of numerous popular texts, including The Perspectives of Psychiatry, McHugh in his writings has explored some of the most strenuously debated topics in psychiatry and social policy, including assisted suicide, recovered memories, addictive behaviors and sexual disorders.

A Harvard graduate who did most of his medical training in Boston, he led the Department of Psychiatry at Johns Hopkins for nearly a quarter of century, stepping down as director in 2002. He is widely credited with building the department into an internationally recognized program in both research and clinical care.

McHugh was among the first to describe increased cortisol secretion associated with depression.. His extensive work studying the control of food intake revealed how gastrointestinal and neurophysiologic mechanisms regulate caloric intake in primates and are disrupted in people with eating disorders.