Weekly bouts of moderate aerobic exercise on a bike or treadmill, or a brisk walk, combined with some weightlifting, may cut down levels of fat in the liver by up to 40 percent in people with type 2 diabetes, a study by physical fitness experts at Johns Hopkins shows.

According to researchers, who will present their findings on Sept. 18 at the annual meeting of the American Association of Cardiovascular and Pulmonary Rehabilitation, in Indianapolis, high liver fat levels are common among people with type 2 diabetes and contribute to heart disease risk.

The study’s lead investigator, exercise physiologist Kerry Stewart, Ed.D., says the rise in the number of people with nonalcoholic fatty liver, mostly due to obesity, signals “a dark trend” because the disease, also called hepatic steatosis, may lead to cirrhosis and subsequent liver failure and transplantation, even cancer, as well as increased risk of diabetes-related heart disease.

“People with type 2 diabetes have added reason to be active and to exercise, not just because it is good for their overall health, but also because our study results pinpoint a key benefit to trimming the fatty liver that complicates their illness and which could accelerate heart disease and liver failure,” says Stewart, a professor of medicine and director of clinical and research exercise physiology at the Johns Hopkins University School of Medicine and its Heart and Vascular Institute.

A majority of the quarter-million people who die each year from all kinds of diabetes do so as a result of some form of heart disease or stroke. And excess body fat is known to increase the likelihood of potentially life-threatening illness because the fat leads to more inflammation in the artery walls, high blood pressure and elevated blood cholesterol levels.

Stewart says the team’s study is believed to be the first to specifically demonstrate the beneficial role played by exercise in controlling hepatic fat levels in people with diabetes.

In the study, 77 diabetic men and women in Baltimore, Md., were divided into two groups. 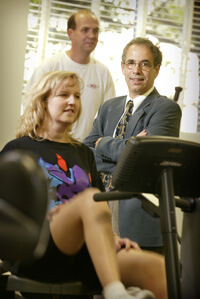 For a six-month period, half of the study participants were put through a moderate program of sustained aerobic exercise consisting of 45-minute sessions three times a week. They could bicycle, run on a treadmill or take brisk walks. In addition, they lifted stacked weights for about 20 minutes, also three times a week, and not at a heavy-duty pace. The other half of the participants were asked to avoid any formal aerobic fitness or gym classes.

Special magnetic resonance imaging scans performed at the start and end of the study showed much lower levels of liver fat in the active group, while levels remained the same in the nonexercising group (at 5.6 percent and 8.5 percent, respectively). Physical fitness exams were also done.

Among the team’s other findings were better measures in general fitness and fatness among exercisers when compared to the nonexercising group. Averages for peak oxygen uptake levels during treadmill testing, or V02 levels, were greater by 13 percent (25.1 milliliters per kilogram per minute, compared to 22.2 milliliters per kilogram per minute), muscles were stronger by 7 percent (lifting 216.7 pounds, as opposed to 202.8 pounds for seven exercises tested), while percentages of body fat and body weight were each lower by 6 percent (35.5 percent versus 33.2 percent, and 98.5 pounds versus 92.2 pounds, respectively). Even waistlines shrunk on average by 2 inches (39 inches, compared to 41 inches).

“The benefits in improved fitness and fatness are clear, and physicians should really have all people with type 2 diabetes actively engaged in an exercise program,” says Stewart, who plans to further promote moderate exercise through direct talks with referring physicians and through his monthly health blog to the public while he amasses more evidence about the benefits of exercise in people with the disease. An estimated 14 million Americans have been diagnosed with this most common form of diabetes, in which the body cannot use its own life-sustaining insulin and eventually stops producing it.

Stewart says his team’s next steps are to analyze the long-term effect of moderate exercise on diabetes and heart disease, including any improvements in heart and blood vessel structure and function, insulin resistance and arterial inflammation.

Funding for the study was provided by the National Institute of Diabetes and Digestive and Kidney Diseases, part of the National Institutes of Health (NIH), with additional assistance from the Johns Hopkins Bayview Institute for Clinical Translational Research, also funded by the NIH. Besides Stewart, other Johns Hopkins researchers who took part in this study were Susanne Bonekamp, D.V.M., Ph.D.; Bethany Barone, S.C.M.; Anita Bacher, M.S.N., M.P.H.; Kristina Potrekus, M.A.; John Moxley, M.A.; Nae-Yuh Wang, M.D.; and Jeanne Clark, M.D.