Jeremy Nathans, M.D., Ph.D., professor of molecular biology and genetics and ophthalmology, and King-Wai Yau, Ph.D., professor of neuroscience and ophthalmology, have been awarded the 2008 António Champalimaud Vision Award by the Champalimaud Foundation in Portugal for their “ground-breaking discoveries in the laboratory that enhance our knowledge and understanding of vision.” 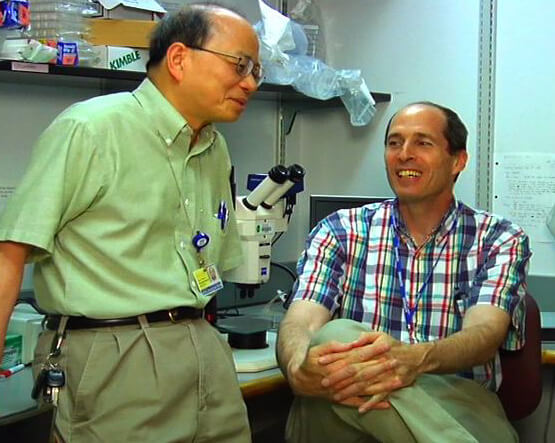 Nathans and Yau will share the €1 million ($1.45 million USD) award presented at a ceremony in Lisbon on Sept. 9.

Nathans has identified the genes that code for the three kinds of light-sensing pigment molecules found in the cone cells — one of the two types of photoreceptor cells in the retina, the other being rods. The pigments are critical for color vision, and Nathans has shown that alterations in these pigment genes are responsible for color blindness—common inherited variations in human color vision. In more recent studies, Nathans discovered and characterized genes that control the normal development of the retina and determined how defects in these genes disrupt the function and survival of retinal cells. These studies have revealed several defects that lead to human retinal diseases including Stargardt disease, the most common type of macular degeneration in children and young adults. Working together, Nathans and Yau also determined the cause of the vitelliform type of macular dystrophy, showing that it is caused by abnormalities in a member of a previously unknown family of ion channels — proteinsthat allow ions to enter and exit cells.

Yau has over the years uncovered the critical roles played by two key signaling molecules — calcium and cyclic GMP — in the process of converting light into electrical signals by the rod and cone photoreceptor cells in the retina, a process known as visual transduction. He has established that cyclic GMP controls the electrical signal by controlling ion channels and that calcium controls the adaptation to light. Yau’s discoveries have led to major advances in the understanding of many hereditary blinding diseases that affect rod and cone cells. More recently, Yau characterized the light-response behaviors of a newly discovered type of photoreceptor cell in the retina. This subpopulation of pigment-containing retinal ganglion cells can react to light and affect circadian rhythms and other nonimage aspects of vision. This body of work helps explain why some blind people who have lost function of their rods and cones and are unable to see can still sense light and are somehow synchronized to day-night cycles. Yau also is a leader in the field of olfactory transduction, which mechanistically bears similarities to visual transduction.

The Champalimaud Foundation is a private organization based in Portugal and dedicated to supporting the development of research in the medical sciences. Its focus is the diagnosis, treatment and prevention of global illness and disease.