Johns Hopkins cardiologist and physician in chief Myron “Mike” Weisfeldt, M.D., has been 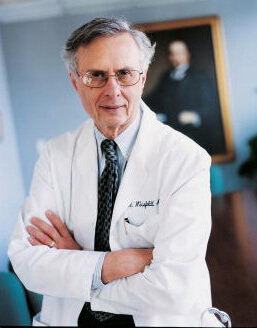 named the recipient of the 2008 Diversity Award by the Association of Professors of Medicine, an organization whose members come from across the United States and Canada.  The award will be presented to Weisfeldt at a luncheon on Feb. 28 during the association’s annual meeting in Miami, Fla.

Weisfeldt is the second recipient of the award, created last year to recognize outstanding achievements in improving diversity in academic medical centers.

“Practicing good medicine goes hand in hand with diversity and multiculturalism,” says Weisfeldt, the William Osler Professor of Medicine and director of the Department of Medicine at Hopkins.  “I feel very privileged to receive this award because it acknowledges that physicians need to reflect the population they serve.”

The award recognizes efforts that Weisfeldt has made a hallmark of his tenure since he took over as director six years ago and began to implement a formal program to increase diversity among residents, fellows and the professorial ranks.

The number of under-represented minority medical residents and fellows has nearly tripled, from 8 percent in 2001 to 23 percent in 2006 (out of slightly more than 100 medical house staff.)

Strong gains have also been made among his faculty in the Department of Medicine, he says, with a near doubling in the numbers of assistant professors of medicine who are under-represented minorities.

In 2005, Hispanic Business magazine ranked the Johns Hopkins University as second only to Stanford University as the best place for Hispanics to study medicine.

“Our high standards have been and remain very high. Our goal was to simply expand the group of qualified applicants among women and under-represented minorities.  They are there and we were determined to find them,” Weisfeldt says.

“Through sound leadership and guidance, Mike Weisfeldt has made tremendous strides in how physicians practice medicine,” says Edward D. Miller, M.D., dean of the medical faculty at Hopkins and chief executive officer of Johns Hopkins Medicine, “from leading efforts to make automated external cardiac defibrillators more widely available to discoveries that have been incorporated to guidelines for CPR and advanced cardiac life support.  Now, as demonstrated by this award, he has also helped transform the culture of medicine, positioning Hopkins to be more globally aware, multicultural in both our outlook and make-up, and much better prepared to act as a world leader in medicine.”

Weisfeldt points out that, in 2000, just one medical resident in more than 100 at Hopkins Hospital was African-American, “unfortunately, a common situation” among academic medical centers historically located in urban centers with majority black populations.

Recent statistics from the Association of American Medical Colleges show that while African Americans, Hispanics/Latinos and Native Americans make up 25 percent of the U.S. population, only 12 percent of students who graduate from the nation's medical schools are from these groups.  Only 6 percent of practicing physicians belong to these minorities.

“Diversity has new meaning at teaching hospitals across the United States, including at Hopkins, whose global mandates now attract patients not only from our immediate community, but also from virtually every part of the world,” says Weisfeldt, who for more than two decades has trained and mentored future physician-scientists, at both Hopkins and at Columbia University in New York.  It was there in the late 1990s that Weisfeldt was introduced to a diversity program and saw its impact firsthand.  He, in turn, used the program as a model for Hopkins.

“Having a formal diversity program is essential to boosting the numbers of minorities and women at all levels of medicine,” he says.  “We still have a long way to go, but in 10 to 12 years time, I am confident that there will be a globally diverse group of medical faculty at Hopkins.”

Among the keystones of his program at Hopkins, Weisfeldt established a diversity council that implemented a host of changes that, he says, “encompassed the entire medical pipeline,” from students to residents and fellows, to faculty and potential physician leaders.

With a modest startup budget from the School of Medicine and a grant from Pfizer, Weisfeldt’s team took deliberate steps to increase the volume of student applicants from minority groups and women and to encourage those who came or were already here, to grow their careers in house.

Ads were placed in journals and on Web sites that served minority medical school students, encouraging applications for residencies and fellowships.

The diversity team assigned to each applicant another member of the Hopkins house staff to act as an advocate and guide the candidate through.  Travel expenses were reimbursed for those students called back for second interviews.

A regular survey was introduced to assess attitudes among current and former minorities on staff and to see what improvements could be made to career development efforts, including peer counseling from minorities and women already at Hopkins.

Other key elements in the department’s program included tracking and feedback of progress to division directors; championing cultural competency training, now a permanent feature of medical training at Hopkins; exit interviews to learn more about the role of an “inclusive” environment on retention of minority faculty; and support for the creation of senior posts to oversee diversity programs across the medical campus.

An institutional survey showed that mentoring and networking opportunities for minorities were valued, and the Department of Medicine began a guest lecture series, plus a senior-year clerkship for a minority medical student, and joint programs with local high schools, encouraging teenagers to pursue careers in medicine.