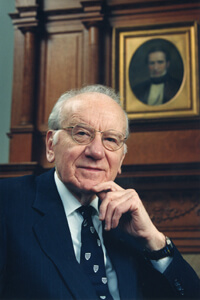 School of Medicine, is the 2008 recipient of the prestigious Japan Prize in Medical Genetics and Genomics, the Science and Technology Foundation of Japan announced today in Tokyo.

The sole laureate in his category this year, McKusick, widely renowned and lauded as the “father of genetic medicine,” will receive a medal and 50 million yen ($470,000) at a formal presentation April 23 in Tokyo attended by the Japanese Emperor and Empress and national dignitaries.

Funded principally by the Matsushita Electric Industrial Co., Ltd., the Japan Prize, now in its 24th year, is awarded to living individuals worldwide “whose original and outstanding achievements in science and technology are recognized as having advanced the frontiers of knowledge and served the cause of peace and prosperity for mankind,” according to the foundation’s description.

“I am deeply appreciative and grateful for this wonderful honor,” says McKusick, for whom the McKusick-Nathans Institute of Genetic Medicine at Johns Hopkins was named in 1999. “In my view, it also honors the contributions and support of Johns Hopkins, and of my colleagues and students over many decades.”

“Johns Hopkins has been the proud beneficiary of Victor McKusick’s pioneering talents and devotion to the advancement of science and human health for 60-plus years,” notes Edward D. Miller, M.D., dean and CEO of Johns Hopkins Medicine. “He is indeed a Hopkins legend, and it is an honor for all of us to have known him as a clinician, scientist, teacher and colleague.”

Americans Vinton Cerf and Robert Kahn, generally credited with pioneering the Internet, will share the prize in the Information Communication Theory and Technology category. Interestingly, perhaps, the transfer of McKusick’s signature scientific work, Mendelian Inheritance in Man, to the Internet made McKusick one of the earlier users of that communication technology.

Two fields of science are designated each year for the prize, which is celebrated during Japan Prize Week with lectures, academic seminars and galas in the island nation.

A native of Parkman, Maine, Victor Almon McKusick, now 86, grew up with his identical twin, Vincent, on a dairy farm. His parents, both former teachers, are credited with instilling education as a priority for all five of their children, and Victor attended Tufts University in Massachusetts for three years before entering the Johns Hopkins University School of Medicine in 1943 without finishing his bachelor’s degree.

He has spent his entire career at Johns Hopkins, completing internship and residency in internal medicine and training as a cardiologist with an interest in the study of heart sounds and murmurs (later published as a classic text, Cardiovascular Sound in Health and Disease) and also of heart defects.

He was led to the then-budding field of genetics when he became the first to describe the cluster of characteristics of Marfan syndrome, an inherited connective tissue disease marked by unusually tall height, heart defects and other abnormalities. His studies of inherited disorders in the Amish uncovered previously unrecognized, inherited conditions and served as a model for studies in similarly isolated populations elsewhere.

Studying these patients and those affected by other familial disorders triggered his determination to identify and catalogue genes and chromosomes that result in multiple physical conditions, and peers around the world credit him with almost single-handedly introducing the incorporation of genetics into the practice of medicine.

In 1966, he first published his master compendium of disorders and genetic factors in disease, formally titled Mendelian Inheritance in Man: Catalogs of Autosomal Recessive, and X-Linked Phenotypes. Now known as OMIM (Online Mendelian Inheritance in Man) or simply “the Catalogue,” it is continually updated online at http://www.ncbi.nlm.nih.gov/omim/  and is considered a bible for medical geneticists around the globe.

A key architect of the Human Genome Project and winner of the 2001 National Medal of Science, the United States’ highest scientific prize, McKusick is also the recipient of the 1997 Albert Lasker Award for Achievement in Medical Science and numerous awards and honorary degrees. He was the co-founder of a course in experimental and human genetics held at the Jackson Laboratory in Bar Harbor, Maine, now in its 49th year and widely credited with training generations of genetic medicine practitioners and scholars.

In 2004, more than 450 donors, including Nobel laureates, contributed funds to establish the Victor A. McKusick Professorship in Medical Genetics at Johns Hopkins.

McKusick’s six decades at Johns Hopkins constitute the longest, uninterrupted service of any faculty member since the school opened in 1893. He served as the William Osler Professor of Medicine, chairman of the Department of Medicine and physician in chief at The Johns Hopkins Hospital from 1973 to 1985.

Among those who will accompany McKusick to Tokyo in April are his wife, Anne McKusick, M.D., his two sons, his twin brother Vincent, and David Valle.

Further information on the McKusick-Nathans Institute of Genetic Medicine can be found at http://www.hopkinsmedicine.org/geneticmedicine/