The first 320-slice computed tomography (CT) scanner in North America, the most powerful X-ray imaging machine in its class, has been installed and is in operation at The Johns Hopkins Hospital.

The 2-metric-ton (4400-pound) device can measure subtle changes in blood flow or minute blockages forming in blood vessels no bigger than the average width of a toothpick (1.5 millimeters) in the heart and brain.  It is one of two devices in the United States scheduled to become operational this year, the other being located in Boston. 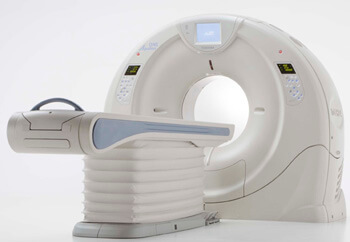 The scanning machine, an Aquilion 320, has more than five times greater detector coverage than its commonly used predecessor, the 64-CT.  The big advantage over other imaging technologies, researchers say, is that the 320-CT can, in 1 second or less, image “slices” as big as 16 centimeters (6.3 inches), which is wide enough to capture most of the body’s organs with one single rotation of its central, X-ray emitting gantry.  The 64-CT, however, only has the capacity to image 3.2 centimeters (1.3 inches) at a time, and it takes longer to perform, up to 10 seconds.

The new scanner, which cost more than a $1 million, is available immediately for general clinical use, having last month received approval from the U.S. Food and Drug Administration.  The technology was approved after initial testing at Hopkins of a similar, but slightly less-powerful 256-CT scanner, conducted earlier this year.  The 256-CT also performed whole-organ imaging, with single scans capturing up to 12.8 centimeters (5 inches).  Both devices are manufactured by Toshiba of Japan.