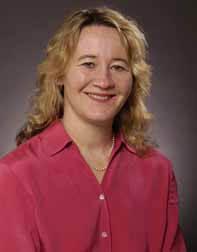 Carol Greider, Ph.D., the Daniel Nathans Professor and director of molecular biology and genetics in the Johns Hopkins Institute of Basic Biomedical Sciences, and one of the world’s pioneering researchers on telomeres, the structures capping the ends of chromosome, will share the 2007 Horwitz Prize with Elizabeth H. Blackburn, Ph.D., of the University of California, San Francisco and Joseph G. Gall, Ph.D., of the Carnegie Institution. The awardees, who were recognized by the Lasker Foundation last year, are again honored for their work contributing to the understanding of telomeres and their role in cancer and stem cell failure.

"This is a well-deserved honor for three basic researchers who pursued their work for the sake of curiosity and knowledge - work that wasn’t driven by clinical goals but still led to better understanding human biology and disease," says Chi V. Dang, M.D., Ph.D., vice dean for research at Hopkins. "We are thrilled that Columbia has chosen to recognize Carol and her colleagues for their accomplishments."

Awarded annually since 1967, the Louisa Gross Horwitz Prize was established by Columbia University to recognize outstanding contributions to basic research in biology and biochemistry. Louisa Gross Horwitz was the daughter of Dr. Samuel David Gross, founder of the American Medical Association.

Each time a cell divides, its telomeres become a little shorter. The consequent loss of telomere function will cause some cells to stop dividing or die and others to undergo chromosome rearrangements that can lead to cancer.

This groundbreaking work spans three generations of teacher-student scientists. Greider, while a graduate student in Blackburn’s lab at the University of California, Berkeley, discovered the enzyme telomerase, which maintains the length and integrity of chromosome ends (telomeres) while trying to understand how chromosomes maintain their length and integrity. Blackburn previously had discovered a special DNA pattern in telomeres while she worked as a research fellow in Gall’s lab, then at Yale.

Together, their discoveries over the years have drawn intense interest from researchers studying the role of telomeres in everything from aging to cancer. "The relationships among these three researchers represent the best promise of academic medicine-science educators guiding their students toward discovery that furthers understanding for the entire science community," says Lee Goldman, M.D., executive vice president for research at Columbia University.

"Basic research continues to be the source of most great discoveries," says Stephen Desiderio, M.D., Ph.D., director of the Institute of Basic Biomedical Sciences at Hopkins. "We are thrilled that Carol is being recognized for her work, which has shown that by pursuing interesting lines of research, devising clever experiments to test new ideas and working with great persistence, one can achieve spectacular results."

The awardees will present the Louisa Gross Horwitz Prize Lectures on Monday, Nov., 19, at Columbia University in New York.