The Johns Hopkins scientist who first showed that the absence of the protein myostatin leads to oversized muscles in mice and men has now found a second protein, follistatin, whose overproduction in mice lacking myostatin doubles the muscle-building effect. 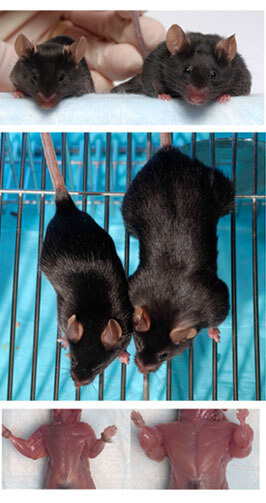 Results of Se-Jin Lee’s new study, appearing this Wednesday in PloS One, show that while mice that lack the gene that makes myostatin have roughly twice the amount of body muscle as normal, mice without myostatin that also overproduce follistatin have about four times as much muscle as normal mice.

Lee, M.D., Ph.D., a professor of molecular biology and genetics, says that this added muscle increase could significantly boost research efforts to “beef up” livestock or promote muscle growth in patients with muscular dystrophy and other wasting diseases.

Specifically, Lee first discovered that follistatin was capable of blocking myostatin activity in muscle cells grown under lab conditions. When he gave it to normal mice, the rodents bulked up, just as would happen if the myostatin gene in these animals was turned off.

He then genetically engineered a mouse that both lacked myostatin and made extra follistatin. If follistatin was increasing muscle growth solely by blocking myostatin, then Lee surmised that follistatin would have no added effect in the absence of myostatin.

“These findings show that the capacity for increasing muscle growth by targeting these pathways is much more extensive than we have appreciated,” adds Lee. “Now we’ll search for other players that cooperate with myostatin, so we can tap the full potential for enhancing muscle growth for clinical applications.”

Lee adds that this issue is of particular significance, as most agents targeting this pathway, including one drug being currently tested in a muscular dystrophy clinical trial,  have been designed to block only myostatin and not other related proteins.

The research was funded by grants from the NIH and the Muscular Dystrophy Association and by a gift from Merck Research Laboratories.