Surgical teams at Johns Hopkins have successfully completed the first five-way donor kidney swap among 10 individuals. All five organ recipients -- three men and two women -- are fine, as are the five donors, all of whom are women. The marathon, 10-hour surgeries that began at 7 a.m. Nov. 14 occupied six operating rooms staffed by twelve surgeons, eleven anesthesiologists and eighteen nurses at The Johns Hopkins Hospital.

Four transplant candidates had come to Johns Hopkins separately for evaluation, each with a willing donor whose blood and tissue types were incompatible with the intended recipient and who therefore could not donate to their loved one. Using a previously developed living donor matching system, the Hopkins transplant team included a so-called altruistic donor in the mix and were able to arrange a five-way swap, in which all four original candidates received compatible kidneys from someone they had never met, and the remaining kidney went to a patient who was next on the United Network for Organ Sharing (UNOS) organ recipient list. An altruistic donor is a person who, for personal reasons, has a generous desire to donate a kidney to no particular recipient. 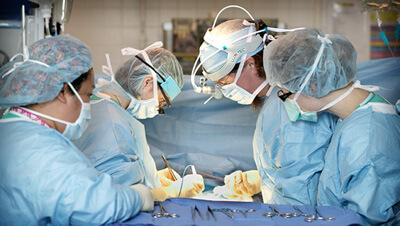 The Hopkins transplant team is a pioneer in the exchange of kidneys between incompatible donor-recipient pairs -- a procedure called kidney paired donation (KPD). Hopkins performed it's first non-domino KPD transplant in 2001, the first non-domino KPD triple transplant in 2003 and the first triple domino transplant in 2005. To date, its surgeons have transplanted 41 patients in KPD operations. In Tuesday’s operations, surgical teams took kidneys from five unrelated female donors and transplanted them into the five unrelated recipients, whose ages range from 40 to 77 years. Donors and recipients hail from California, West Virginia, Florida, Maine, Maryland and Ontario, Canada.

The one “altruistic” donor, Honore Rothstein, is a healthy 48-year-old computer programmer who says she was motivated to donate a kidney after losing both her husband and her daughter in separate accidents or illnesses.

“It has been a privilege to help Ms. Rothstein fully realize her altruism by placing her into a domino transplant where her gift has made five transplants possible that would not have occurred,” says Robert Montgomery, director of the Incompatible Kidney Transplant Program, chief of the Division of Transplantation, and director of the Comprehensive Transplant Center at Hopkins.

In a paper published last August in the British journal Lancet, Montgomery laid out the blueprint for a wider system of pairing altruistic donors and incompatible recipient pairs to greatly increase the number of available organs and better serve the interests of both transplant donors and recipients.

Without a universal system of this kind in place, Montgomery says altruistic donors often end up on an Internet donation site or are subject to inconsistent allocation systems in which only a single patient benefits. For example, in some cases, the kidney goes to a patient deemed to have the best chance for long-term survival, while in others, the organ is given to a patient in greatest need or to someone at the top of the UNOS waiting list regardless of predicted outcome or need.

“With domino paired donation, all three of these ethical tenets are satisfied,” says Montgomery. “The likelihood of a good outcome is increased by spreading the risk of recipient graft loss across more people. The neediest are served, since in many cases incompatible donor-recipient pools have a high proportion of patients who are hard to match. And fairness is served because the last paired donor’s kidney in the chain is allocated to the next compatible patient on the deceased donor waiting list.”

All five donor surgeries began simultaneously at 7:15 a.m. and were finished at 11 a.m. The four donor kidneys remained in the same operating rooms, which were cleaned and readied for the intended recipients. One kidney was taken to another room.  The recipients’ procedures began at 1 p.m. and were finished at 5:15 p.m. All the donors were released from the hospital by Nov. 17, and the recipients should be released by Nov. 20.

Each of the donors will be monitored for the remainder of their lives to make sure their remaining kidney continues to function properly. The recipients have been placed on medications that will help insure that they won’t reject the kidney. They will be evaluated weekly for the first six weeks, then monthly, with the frequency of hospital visits slowly tapering off over time. The average expected life of a live donor kidney is 18 to 20 years. The recipients had lost the use of their kidneys for a variety of reasons, including blood clots, end-stage renal disease and a motor vehicle accident.