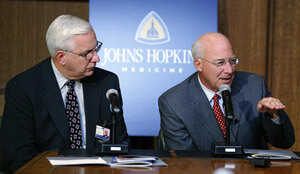 "I can think of no more fitting individual to lead the board of Johns Hopkins Medicine," says Edward D. Miller, M.D., Dean of the Medical Faculty and CEO of Johns Hopkins Medicine. "Mike Armstrong has great respect for our patient care, education and research missions, and has endowed the C. Michael Armstrong Professorship in Medicine to help us continue our leadership role in stem cell research. We can benefit enormously from his business acumen, including his experience in the international realm, as we work to translate the discoveries of our scientists into treatments that should transform 21st century medicine." 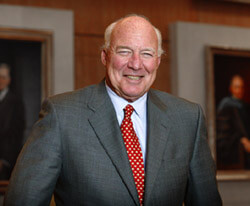 The Hopkins professorship endowed by Armstrong is held by John Gearhart, recognized as one of the two scientists who discovered pluripotent stem cells. "I believe strongly that stem cell research is both acceptable and necessary," Armstrong says. "It's acceptable because today we have an in vitro embryonic stem cell supply that we are discarding and destroying. It's necessary because embryonic stem cells are such a critical source of differentiation, and a tool to advance understanding."

While acknowledging that the issue remains a delicate one politically, Armstrong maintains that "Political reticence isn't a moral excuse for inaction. Progress should not be impeded by politics. With respect to Hopkins, I think that our medical culture of discovery and our commitment to alleviate suffering require us to be leaders politically."

An active supporter of higher education, Armstrong also is a trustee of The Johns Hopkins University, a Visiting Professor of the Practice of Management at the MIT Sloan School of Management, and has been chairman of the Board of Visitors of Johns Hopkins Medicine. 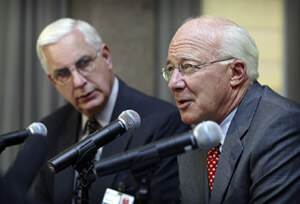 Former chairman of the U.S.-Japan Business Council, the President's Export Council, and the FCC's Network Reliability and Interoperability Council, Armstrong is a former member of the Business Council and the Business Roundtable, where he served as chairman of the Homeland Security Task Force. He is a member of the Council on Foreign Relations and the Telluride Foundation, and serves on the board of directors of Citigroup, Hospital Corporation of America, Parsons, Information Handling Services and Schroder Ventures U.S. Advisory Board. Comcast has created the position of director emeritus for him.

Born October 18, 1938 in Detroit, Armstrong earned a Bachelor of Science degree in business and economics from Miami University of Ohio in 1961 and completed the advanced management curriculum at Dartmouth Institute in 1976. He has received honorary doctor of laws degrees from Pepperdine University, Loyola Marymount University, Worcester Polytechnic Institute, and Shenandoah University.