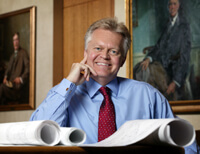 “From the time I first came to Johns Hopkins as director of the Department of Anesthesiology and Critical Care Medicine, Steve has been at my right hand,” said JHM Dean and CEO Edward D. Miller, M.D., in announcing the promotion. “In his most recent role as vice president of ambulatory services coordination, he has led efforts to expand our ambulatory network. Now, his experience and knowledge of both the School of Medicine and Johns Hopkins Health System should be of immense value in JHM’s continued evolution.”

In the newly created post, Thompson will coordinate and oversee planning, integration and growth of JHM's inpatient and outpatient clinical enterprise, working closely with the Clinical Practice Association’s leadership, as well as with the leaders within the Johns Hopkins Hospital and Health System to implement clinical programs developed by each department and JHM entity.

Thompson, 45, joined Hopkins in 1994 as administrator of the Department of Anesthesiology and Critical Care Medicine.  In 1997 he was promoted to vice dean for administration for JHM, and the following year was appointed CEO of Johns Hopkins Singapore Clinical Services. In 1999 Thompson was named CEO of Johns Hopkins International L.L.C. and in 2000 was promoted to vice president of ambulatory services.

In addition to his other responsibilities, Thompson will oversee management of Hopkins’ external clinical business relationships as well as the marketing programs in support of the clinical enterprise, and will play a key role for the JHM Business Review Group.  Thompson, a resident of Baltimore, obtained his bachelor of science degree from the University of Minnesota and his master of business administration degree from Loyola College in Baltimore.